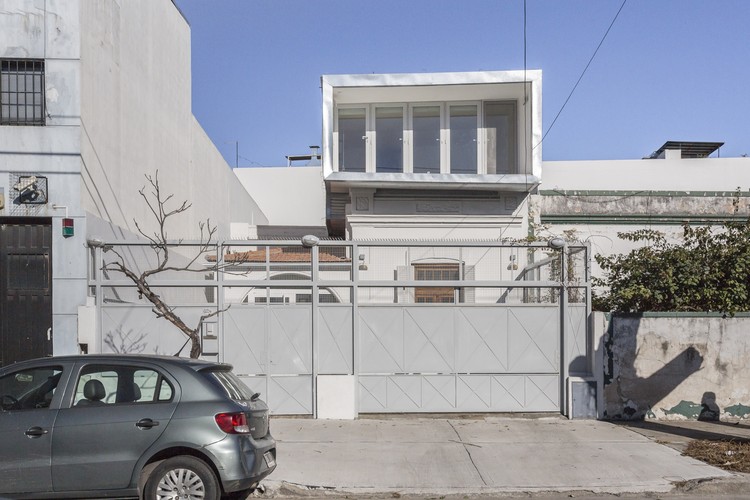 Text description provided by the architects. The Marta House is part of a set of works that the studio has been doing with similar strategies; newborn artifacts located over the existing, trying to link them with the unique nature of the Buenos Aires roofs, as well as introducing a series of relationships with the natural environment, the nature that lies beneath the city, and that when revalued, it raises methods of approach between the crude need of the urban and the possibility of generating landscapes of kindness for the human being and all the species that coexist or could coexist with him in these areas.

The house is a single-family house from the first part of century 20, typical of Buenos Aires central districts. It was designed for a six-member family, a marriage with 4 children, with ages ranging from 9 to 14 years. The program included, in addition to spatial improvements and a new organization on the existing ground floor, the incorporation of a master bedroom upstairs, storage space and services and the readjustment of a grill sector with a view to using the Roof as an expansion for family events.

The expansion module added to the upper floor, works as a single piece that contains the access ladder and wraps with a metallic skin each one of the elements that compose it, unifying the new with the existing, and that when hovering towards the street, it covers with a cantilever the access to the house and endows it with personality.

A skylight on the staircase was born to improve the climatic condition of the ground floor (which now also adds new windows and cross ventilation) allowing its opening to evacuate the hot air, generating a very useful fireplace effect in summer, as well as introducing natural light in the circulation.

In the center of the house,  a revalued courtyard works as an articulator of public and private areas and builds the framework for the incorporation of the staircase as a fold that arises from the volume perched on the existing. In conjunction with the skylight, they produce a deformation of the piece that from some angles is seen as a prism, but from here, it parasitizes and is introduced finding vacant spaces in the original construction.

To this new volume, completely built in dry and covered in sheet metal, is added a weave of anchors, attached to the fastening screws of the sheet, in order to allow future receive a new vegetable skin and behaving as support for a great variety of species, plants, birds and insects, transforming the facade into a kind of garden or vertical ecosystem that completes the architecture generating a contribution to the nature of the city.

We assume that with the multiplication of these artifacts involved with the natural, hovering above the constructed fabric, one could think of an increase in density that is not contrary to the idea of ​​achieving a more human and pleasant city for all the thousands of organisms and microorganisms that we inhabit in it.