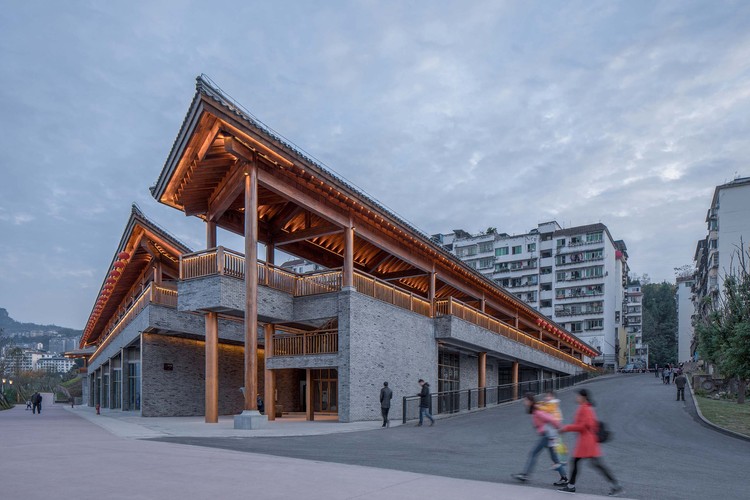 Text description provided by the architects. The relationship of the city Yunyang, a new immigrant city relocated for the construction of the Three Gorges, and the river is under long-term discussion. In 2015, the Yunyang Municipal Government carried out a comprehensive improvement project of the 35km reservoir bank alongside the Yangtze River and the Pengxi River, dredging the waterfront space and building landscape parks, squares and trails, to forma coherent riverside pedestrian system. Tanghua Architect & Associates is assigned to design three riverside service buildings on the junction of the two rivers: the Tiangongbao, the fishery banquet hall and the Sifangjing, which are ought to serve as important public nodes connecting the Sifangjing Wharf Park, the Shuangjiang Bridge Park and the Muyubao Park, with Yunyang Yunyang Civil Cutural Center.

The site of Tiangongbao is surrounded by commercial and residential land, hence our design blend the building volume into the ups and downs of the natural mountain in the form of gentle slopes. Sifangjing Wharf is a delta terrain stretching into the river surface with the site of the Fishing Banquet Hall at the top of the triangle and the site of Sifangjing Service Building behind it. Among these buildings, the Sifangjing service building is the first completed project.

The site of Sifangjing Service Building is an irregular polygonal slope, ascending from south to north, from the city to the river surface, and the maximum height difference reaches 8 meters. How the architecture conforms to the riverside terrain while achieving the optimal landscape view and becomes a “wedge” that connects the faults of the city and the dock has been taken into our primary consideration.

Above the pedestal, the sloping roof of the Sifangjing Service Building floats along the river, blending into the contours of the distant peaks. Aiming to minimize earthwork, the design follows the height differences of the site, therefore forms a "podium" which consists of 2 storeys to the south and 1 storey to the east and the west. The first floor is connected to the north side riverside landscape belt while the second floor is connected to the west side city road.  By constructing the podium, we construct a sightseeing platform where the landscape has been completely changed. Dealing with the similar context as Utzon towards Sydney Bay, the eaves and pedestals have become our respond to the problem of landscapes and venues.

The design originates from the concept of “Square Well” and thus arranges the building along the site border into a polygonal courtyard. Further by deconstructing the roof, the complete roof is broken into several different traditional slope forms, and two openings are formed facing the Pengxi River, becoming a sinking courtyard and a sightseeing platform.

The beam-column system of traditional architecture is adopted, and several adjustments of the proportional relationship between beams and columns are made according to modern structural mechanics. Traditional materials such as wood and blue bricks are largely used for exterior design, interior finish and floor respectively along with some modern materials such as metal, glass and terracotta. 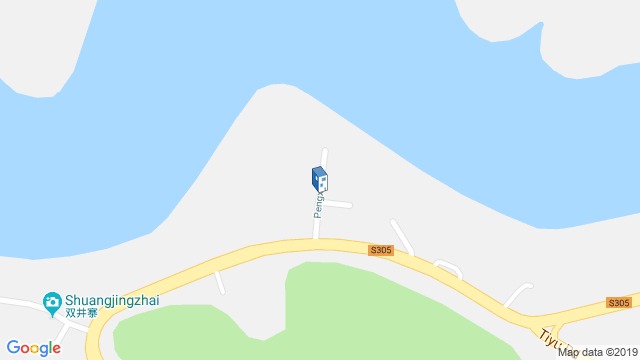 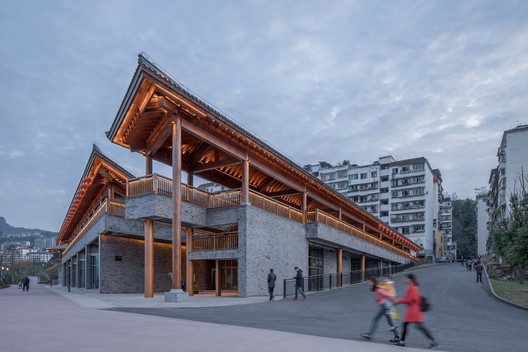