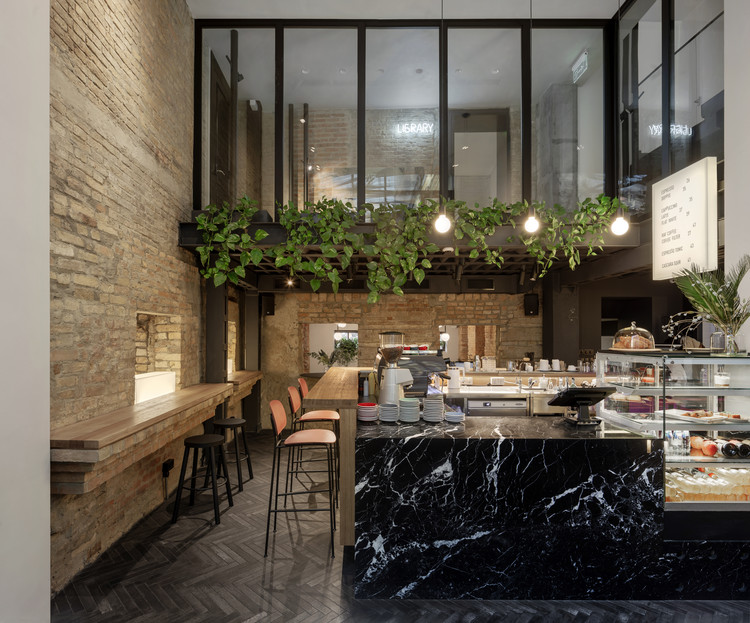 Text description provided by the architects. It is difficult to describe BURSA in one word. It is not just a hotel or a restaurant, not a bar or an art gallery. It is all of the above, a bespoke hotel complex fitted comfortably into a mix of centuries-old buildings in historical and cultural center of Kyiv – Podil.

Our very first meeting with BURSA’s founder was an instant ‘click’, followed by months of panning, designing and building.  Our shared vision - to create a conceptual space with its own philosophy – has materialized as a unique place with distinctive design and multiple functionalities.

Two buildings – a hundred and a two hundred years old - were completely refurbished and, together with a newly erected modern block, integrated into a single complex, thus creating a visual connection between architectural styles and setting a tone for what might be inside. The idea was to link two old buildings with a modern block, where appreciation of history and tradition will co-exist with modern art, design and innovation.

BURSA’s oldest building has become a historically significant architectural monument for more than one reason. It has definitely seen a lot, at its respectful age of 200. In the past, for many years it housed students of one of the oldest Ukrainian academies. It was also a place where a famous Kyiv city architect Andrey Melenskiy lived and worked at the turn of the 18thcentury.

Historic significance of BURSA’s building required careful consideration of any work associated with restoration, repair or future use of the building.  Conceptual approach undertaken by architects was that of an ‘adaptive reuse’, allowing the building to preserve its historic integrity and aesthetics while providing for the needs of modern occupants.

Based on historical references, decisions were made as to which architectural elements had to be retained, thus preserving as much of original fabric as possible.  New additions to the building, while differentiated from the old, were still keeping with the original structure's architectural features and scale.

Fully functional, BURSA encompasses a non-commercial art gallery, a 4-storey hotel offering 33 modern rooms of various sizes, a ground floor restaurant Belyi Shum (can be translated as White Noise), and a top-level bar 1818 that opens onto the rooftop terrace.
The common thread running through the entire space is a distinctive influence of Bauhaus style, best known for promoting functionality in architecture and design through simplified geometrical forms and minimal use of embellishments.

Every room and common area in BURSA hotel is our interpretation of Bauhaus style.  Clean lines, simple forms, monochrome palette with just enough color to make an accent, to keep it unique.  Even the smallest room feels spacious due to careful planning, use of light and color, and total exclusion of unnecessary elements.

We believe that for any design element to look authentic and original, it simply has to be just that. With such approach, we spend a lot of time searching for the right materials, furnishings and shapes. To make a brick frieze supporting the bar in the Belyi Shum Cafe, for example, we found bricks made in the same year as the building.  We wanted the frieze to be perceived as an integral part of the wall, rather than a later addition forced into the interior. The restaurant chairs, another example, are deliberately ‘old school’ and all original, found in Parisian and Norwegian antique shops and flea markets, then restored. They add character, and emphasize authenticity and originality of the place.

1818 was the year when the original building was erected, hence the name of the bar – 1818 - on its roof. In line with the overall architectural style of BURSA complex, we kept the design of 1818 functional and uncluttered. We wanted nothing to detract from, or compete with a colorful backdrop of diverse architectural forms surrounding the roof terrace.

“Natural’ and ‘original’, in addition to ‘functional’ and ‘minimal’ is another way to describe BURSA style. We created a place where ‘concrete stuff is made of concrete, and wooden things – of wood, just the way it should be’.

From the façade incorporating two-hundred year old buildings and modern metal structure, to the reception desk, featuring scrunched up metal sheets behind glass panel, to rooms with concise and precise objects placement, – the hotel complex appeals to those who appreciate comfortable simplicity of modern design. We hope we created a place where one comes as a guest and feels at home. 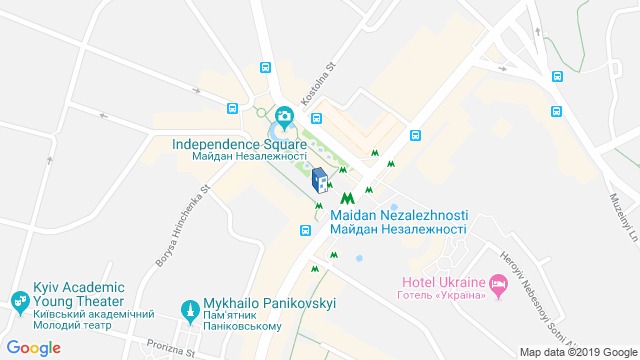 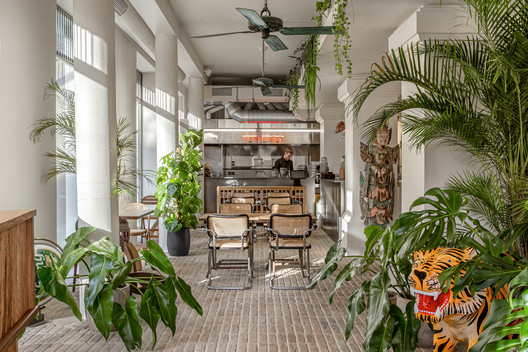