The results of the LA+ ICONCOCLAST competition have been published, asking designers to reimagine and redesign New York’s Central Park following a fictional eco-terrorist attack. In total, over 380 designers from 30 countries submitted over 190 designs, culminating in five equal winners.

Hailing from the UK, USA, China, and Australia, the winning entries ranged from "megastructures to new ecologies and radical ideas for democratizing public space.” Jury chair Richard Weller praised the winners for “how designers can move beyond the status quo of picturesque large parks and embrace the challenges and opportunities of the 21st century.”

As a reward, each winner received $4000 and a feature in LA+ Journal’s upcoming LA+ ICONOCLAST issue. Below, we have rounded up the five winners, complete with a short description. For more information on the competition, visit the official website here.

The Geoscraper of the Captive Biomes / Tiago Torres-Campos (Edinburgh, UK)

Description: On this day, one hundred years ago, Central Park’s vegetation was suddenly wiped out. In a few days, one of the world’s most cherished landscapes disappeared without a trace. The Gaians were extremely violent in drawing attention to the planetary destruction we were causing.

Periods of mourning following brutal attacks are often pivotal in the collective lives of cities. They are times of grief, sorrow, and absence, just as they are times of rebirth, hope, and reconstruction. Above all, they bring about great, meaningful transformation.

Description: The MANNAHATTA PLATEAU presents a dynamic ecological vision of nature integrated with urbanism. The ravaged original surface of Central Park is left as a regenerating wilderness, a temple to the raw power of nature. Built over it is a green mega-structure, a plateau that supports a raised parkland consisting of a patchwork of abundantly diverse interconnecting environmental zones. The bold, linear aesthetic of the plateau offers a new perspective upon the wilderness that lies partially revealed beneath its cut-out surface. The 200-foot-high structure is inscribed by the lines and scale of the city itself – the typical Manhattan building lot (25 x 100 ft) serves as the basic modular. The street grid is celebrated by being projected across the park’s surface, yet the rigid geometry of urban forms is broken down into subsections defined by the flowing lines of nature. In addition, supporting structures containing vertical circulation are clad in glass that directs light back onto the dystopic landscape below, whilst optically blurring the distinction between nature and architecture.

Description: The disenchantment of weather/cloud is a result of the rationalization project of nature since the 19th century, Central Park being one of its prime achievements. As the terrorist attack broke the old narrative of an everlasting Arcadian park, the best way of reconstruction is to restore a place of uncertainty – cloud space.

After the terrorist attack, Central Park lost all of its trees, causing the microclimate to change dramatically. The increase in evaporation due to the loss of the tree cover poses a problem for any reconstruction idea. Our short-term plan proposes creating a layer of cloud over the Park. The layer—meant to decrease the evaporation of water and protect the reconstruction of the ecosystem—will be created and maintained by artificial-cloud infrastructure. Water used in the plan will come from the AC condensate of Manhattan office buildings ­– essentially the water vapor exhaled by people. In this way, every New Yorker is part of the great “Breathe to Save Central Park” plan.

Description: Following the 2018 eco-terrorist attack on Central Park, New York City authorities—acknowledging the public’s concern about the depletion of global resources—embarked on a radical program to reduce the city’s environmental footprint. It was decreed that Central Park would be encouraged to rewild naturally within the existing structure of Olmsted’s Central Park masterplan. Furthermore, it was decreed that by 2033 all vehicles within Manhattan would be electric with ride-sharing incentivized. This bold move had the result of freeing up a vast area of formerly car-dominated public space, namely vehicle carriageways, which the city converted into new urban parklands with an area twice the size of the original Central Park – a new de(Central)ized Park.

Description: New York is the largest city in the United States and its problem of gentrification is particularly serious. When a community environment which is relatively poor needs to be updated, it will have to introduce external funds to do so. Following improvement, house prices and rental incomes generally increase, but not all of the original community are able to afford to live there and they may ultimately be displaced. A typical example of this phenomenon is the High Line park. On the other hand, many urban parks in rich areas receive large social donations for the improvement of green spaces. In summary, there is an uneven distribution of green space construction funds and a mismatch between residents’ income and expenditure on public space. 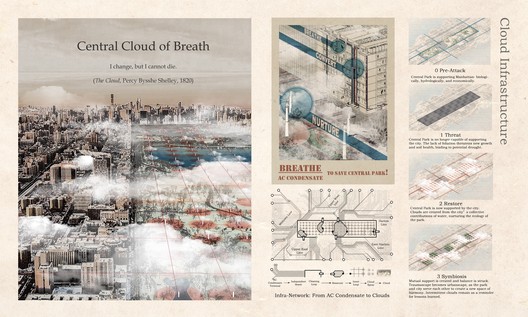