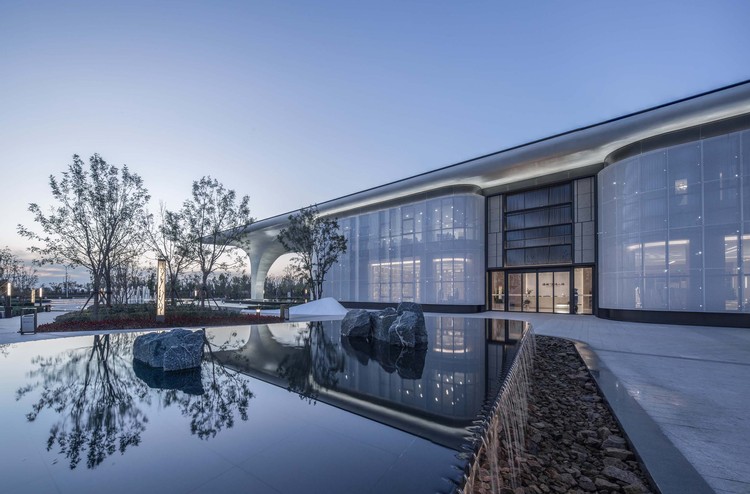 Introduction
Tangshan Blue Bay Town Project is located on the southeast coast of Leting County, Tangshan City and on the north side of Tangshan Bay International Tourism Island. As a commercial center of the project, the town center is located at the southwest corner of the project base, where Xiangying Road and Haijing Avenue join at 70 degrees in a narrow and long triangle land to define the land area with functions including life experience hall and community facilities.

Site and Architecture
As the first portal to communicate with city interface, we consider how to make the architecture efficient and reasonable: 1. A suitable site; 2. A landmark city interface; 3. Overall project architecture style to effectively connect neo Chinese style; 4. To create multi-layer public space and urban life.

The interface facing the city road is set with two strips and opens to the road intersection to form a display surface with an open frontcourt space and a shallow mirror pool as a buffer zone with the city environment, presenting a quiet and elegant posture.

The umbrella-shaped columns of cast-in-place concrete as high as 10m are undoubtedly the main part of the whole building. The umbrella-shaped columns at the two corners extend upwards to form a whole “C-shaped” flat roof, integrating the mass of the whole building under the roof to form a unified and concise architectural image. The flat roof in the east covers a community facility center with neo Chinese facade style, which organically combines modern style with neo Chinese style to form a good transition of city interface and community environment.

Function Organization and Spatial Sequence
The building is composed of three masses. The mass facing the city road in the west is of a living facility function, and the specialty catering and activity center and other functions have been mainly set up; the mass in the south is a life experience hall and the project in the early stage is used as a sales department; the mass in the east is close to the main entrance of the community, with main functions including supermarket, restaurant, fitness room, physical examination center and other facilities for the convenience of the people.

The space extends from west to east along the city interface and opens to all directions of the city to guide people from all directions. At the same time, the space between every two masses forms the main sequence of entry, transitional urban environment and internal landscape courtyard. The two concrete umbrella-shaped columns mark the space image, and the overhanging flat roof is limited upward in space, forming a grey space for users to pass through and stay in.

Architectural Texture and Expression
The life experience hall and the living facilities on the west side are designed in a modern style. The facade along city interface shall be a bilateral-skin facade. The inlayer includes block wall and long-strip windows and the outer layer is covered with white perforated aluminum plates, which can not only meet using requirements but also guarantee a clean city interface. In the lamplight at night, the lamplight in the building creates a hazy atmosphere through perforated aluminum plates.

On the architectural interface facing the internal courtyard, bronze carved hollowed-out metal decorative panels echo with the neo Chinese style of the project, thus reducing the sense of fragmentation of the internal environment of the community. The overhanging metal canopy further reduces the sense of building volume, which creates a pleasant measure feeling.

The neo Chinese architectural style consistent with the whole project is adopted in the living facilities on the east side. The collage of multiple materials and refined detail treatment utilize architecture technique to the utmost. Inlaying metal lines in the 30mm open joints of creamy-white stone improves the architectural quality. LOW-E glass curtain wall with hidden frame and stone surface form a sharp contrast and highlight the texture.

Multilayer Open Space
In the design, we have provided with a multi-layer open space for users to pass through, stay in and move about. At the turning corner of the city, we have designed a mirror surface pool and an activity site, which enhances the image of the whole venue. In the east, we have designed an entrance square to meet many demands for commercial use. The internal courtyard enclosed provides an inward and comfortable playing space, while the passage connecting the internal courtyard with the urban space (i.e. the position of the umbrella-shaped columns) provides more of a sense of ritual to pass through and greatly improves the quality of the space.

As a typical community-based public building, we hope to create an organic connection between a city, a community and people and enable it to become a unique public space. 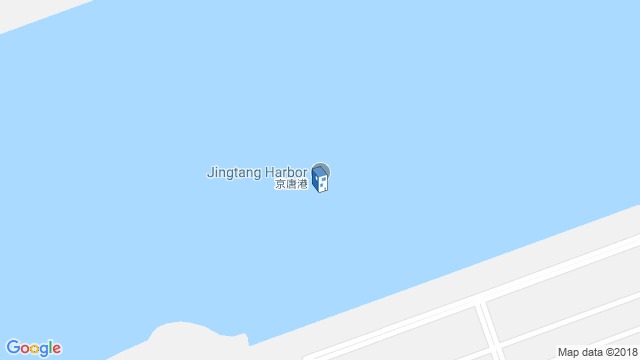 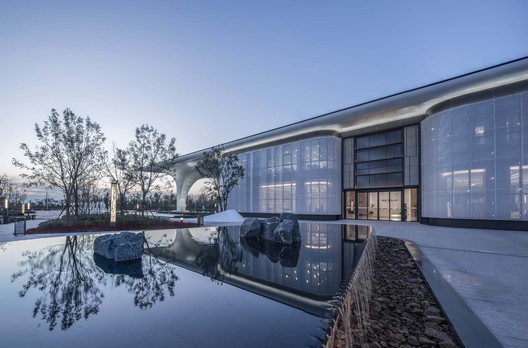