Save
Coral Cities: The World's Most Liveable Cities Visualized
Share
Or
Copy

Craig Taylor, Data Visualization Design Manager at ITO World, has created a series of beautiful visualizations showing commutes in the world's most liveable cities. Using color in the form of growing coral, the project depicts city infrastructure through rendered street networks. The visualizations show how far you can travel by car in 30 minutes from a city center. Dubbed Coral Cities, the project has extended to include 40 major cities across the world.

In a series of animations, Taylor represents the major arteries in each city and how they’re shaped around water, mountains and other geographical features. According to Taylor, the colorful hues do not have any technical purpose, but were used purely for aesthetics. While the maps only show commute distances, not commute times or road congestion, they begin to tell a story of urban density, transportation and movement.

As Taylor said, "The varying patterns of urban forms are inherently dictated by their road network; a complex, seemingly organic connection of links moving people across their city. Like branches of coral they have a pattern and a function, I chose to expose this pattern and manipulate it to become something far more conceptual." Coral Cities took 6 months to complete, and Taylor plans to create a series of prints for sale on the project. 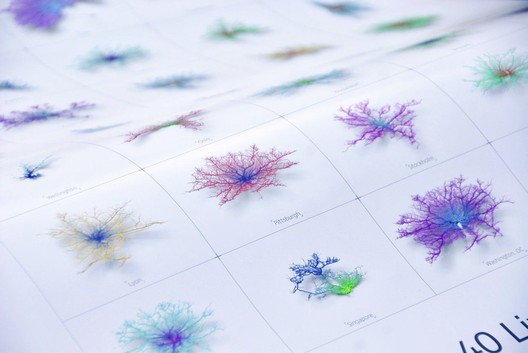