Save
Detailed Plans of 7 Famous Hotel Rooms; including The Shining, Pretty Woman, and The Hangover
Share
Or
Copy

Hotels, both real and fictional, have hosted some of TV and film’s most popular screenings through the years, from classics such as Pretty Woman to modern phenomena like Bates Hotel. While a weekend trip to fictional locations such as the Best Exotic Marigold Hotel and Fawlty Towers are beyond our reach, there are in fact many iconic hotel rooms from films that you can book right now.

To demonstrate this, Expedia recently commissioned a series of detailed floor plans of hotels from famous plots. From the Majestic Yosemite Hotel featured in The Shining (which is seemingly spatially possible after all) to The Ceasars Palace Las Vegas suits from the Hangover (Ceasar didn’t actually live there) we have republished the floor plans below for your inspection.

The representations were created in collaboration with architects Jelena Popovic and Barbara Lew, taking screengrabs of film scenes to understand the rooms from every possible angle. The resulting plans and 3D models drawn from the research were then shared with public communities for feedback from movie lovers, resulting in the final works below.

Expedia: Julia Roberts and Richard Gere became household names with this Hollywoodized take on the Pygmalion myth set in Los Angeles. It takes place in a Los Angeles hotel, and much of the pleasure of the film comes from watching Roberts living the luxury life in the unfamiliar setting of the Beverly Wilshire.

Expedia: King among famous hotels, the one from The Shining has captivated movie lovers for nearly four decades. On the one hand, some believe the endless scenes of Danny tricycling around the hallways are director Stanley Kubrick’s way of mapping the space for viewers. On the other hand, fans have noticed that the layout of the hotel is spatially impossible. This just adds to the eerie feeling of the film.

Expedia: Fontainebleau Miami Beach hotel rooms are etched into the memories of Bond fans as setting the scene for where Sean Connery found that his girlfriend had been painted to death with gold leaf. In reality, that scene was shot on a sound stage at Pinewood Studios in the UK.

Expedia: The Ambassador hotel was the location for the Academy Awards for 6 years, and famously was the place where presidential candidate Robert F Kennedy was assassinated. Even among other notable hotels in Los Angeles, it was a hot-spot for celebrities. Rudolph Valentino, Charlie Chaplin, Joan Crawford, and Errol Flynn were among those who could be spotted drinking at the hotel’s nightclub, even during prohibition!

Expedia: Wes Anderson’s short prologue to The Darjeeling Limited is an overlooked gem. Hôtel Raphael on Avenue Kléber stood in for the fictional Chevalier, and although the characters never leave the room they might have taken in a panoramic view over Paris had they ventured to the rooftop terrace.

Expedia: If the old emperor joined you on a bender in Vegas today, he’d certainly feel at home among the Roman-inspired art and architecture of the Caesars Palace suites. The marble bathroom will make you feel like winners, and if Caesar stays sober enough it’s only a short stumble to the Garden of the Gods Pool. 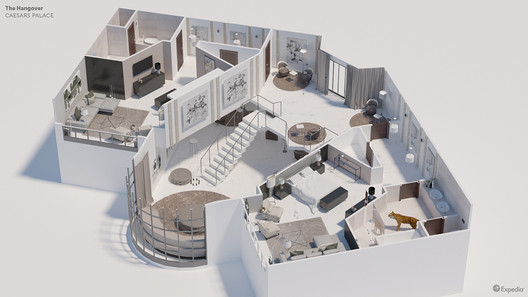