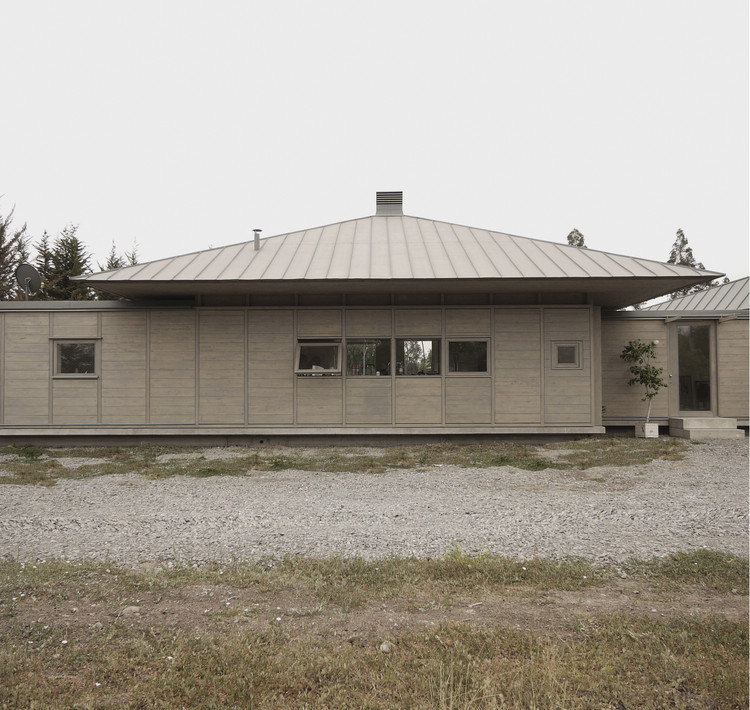 Text description provided by the architects. Just like House Nº 1, this house is located in a half rural, half suburban area of Curicó. It was designed for a judge and her two daughters. Several themes are hidden behind the apparently banal recurrence to the formula of the pavilion, so dear to the modernist canon. For a start, the more private sphere of domesticity was organized in the eastern wing through a corridor which by virtue of its size has become an antechamber, if not a room in its own right.

Closets have been reversed towards this room so as to sometimes turn dressing into a common celebration, as requested by client and daughters. Hence the wide bay window and the bench, and hence, too, the continuous skylight on the roof. Two bathrooms complete the ensemble of elements that will grant this space enough activity so as to consider it one amongst the rooms of the house. The adjacent bedrooms can be fully traversed towards the roofed terrace, thus adding another component of publicity to the layout. The main bedroom intensifies the interplay between the rooms bringing into play a version of the ancient aedicule revitalized by Charles Moore in some of his own residences.

The western pavilion is an exercise on compression and distribution: living room, dining room, kitchen, storage, laundry and service room – that is to say two interdependent parts of the domestic world – have been articulated through an enclosed patio that insists on the autonomy of the dwelling, particularly in the context of a site that offers little to cling to. Kitchen, dining, and living room have been organized around a chimney, which is at the same time the column that supports a pyramidal roof – an iteration of the structure used at the Köök bistro. The ceiling is tall enough so as to host a space on top of the kitchen – a work place for the mother/judge.

Between the two pavilions we devised a small articulator, clumsy when looked at on the plan, more gracious when extruded. As for the roofs, their physiognomies respond to fundamentally different problems, although they both recur to similar aesthetic codes. In the future we hope to add a third roof giving form to a garden ‘room’ associated with the pool and garden activities. We decided to turn to prefabricated elements to facilitate the construction process, and provide with enough regularity for the roof structure as well as for the expression of facades.