The crossing of an imaginary line 100 years ago resulted in the death of an African-American teenager named Eugene Williams, inciting the Chicago Race Riot of 1919. This chain of events demonstrates the power of lines – conceptual and physical – in shaping places and lives. Whether material or immaterial, the lines of Chicago both define, and are defined by, the power relations between the city’s spaces, its people, and how they use these spaces.

Chicago is a product of its lines - lines that conceptually and physically demarcate, regulate, contain, separate , and knit together our physical environment. These seams and boundaries, through their thickness and content, have the power to both connect and divide. Some lines, like the invisible one that Eugene Williams inadvertently crossed, segregate groups of people to devastating effect without leaving a physical trace. Others, such as those encircling parishes and neighborhoods, bring people together and foster identities that remain strong even after the lines themselves disappear from maps. Ward and police district boundaries can determine the distribution of power and resources between communities. Zoning boundaries separate the cityscape into distinct parcels, their character and growth set into motion by planners for decades to come. Revitalized infrastructural lines, such as the 606, are a magnet for visitors and investors, setting off a ripple of urban regeneration along their length.

Crossing the Line will investigate these lines and many others, and the issues they raise in the city of Chicago.

For this year’s Chicago Prize, we are calling for visionary proposals that cross the line. Participants are asked to select one or multiple material and/or immaterial lines that form Chicago, identify their significance, and propose a design that addresses the urban ramifications of these lines.

Can the materialization of invisible lines through architectural interventions create agency?
Can strategies that reinforce or erase a line function as a framework that can create change? Would new strategies of thickening a line merge stand-alone districts?
Can architectural interventions function as a framework for the excitation of a line?
How can the urban-architectural collision and negotiation of two sides create a radical emergence of the unimaginable? 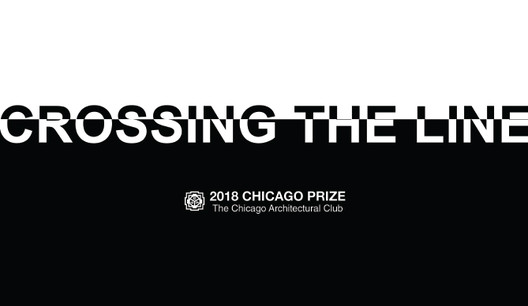