Plans for a set of skyscrapers for Brisbane, designed by Zaha Hadid Architects, have been scrapped following a long-running controversy. The "Grace on Coronation" scheme, lodged for application in 2014, consisted of three sculptural residential towers and sought to reinvigorate a historic site in Toowong, four kilometers west of Brisbane’s Central Business District.

However, the scheme has been criticized for a perceived lack of sensitivity to the surrounding area, with its proposed 27 stories breaching the city plan limit of 15 stories. In May 2018, a sole resident won an appeal against the development due to the height violation.

The developer behind the $430 million scheme, Sunland Group, has now announced that the scheme will not go ahead, following a Court of Appeal decision in September upholding the resident’s objection.

When we lodged our development application in 2014, our vision was to introduce world-class architecture and community parklands to the inner-city riverfront site, which has been closed to the public for more than 160 years.
-Sahba Abedian, Managing Director, Sunland

The scheme had been envisioned by the design team as “a flower in bloom” with a multilayer facade, composed of curtain wall glazing beneath a diamond patterning of glass reinforced concrete. The late Zaha Hadid, at the time of the project’s reveal, said "The design tapers each structure to minimize their footprint and open the riverfront to the public; creating a vibrant civic space for Toowong within a new riverside park.”

The 555-unit scheme was to be surrounded by extensive public space, which the team unsuccessfully argued mitigated against the excessive height of the three towers, with two at 24 stories, and one at 27 stories.

As reported by The Urban Developer, Sunland director Abedian has indicated the company is “directing every effort” towards “a new architectural outcome that celebrated the unique riverfront site and contributes to Brisbane’s coming of age as a true international city.”

News via: The Urban Developer / The Brisbane Times 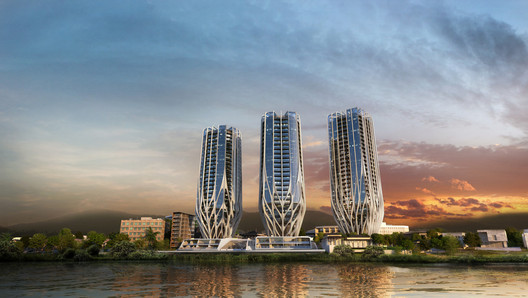