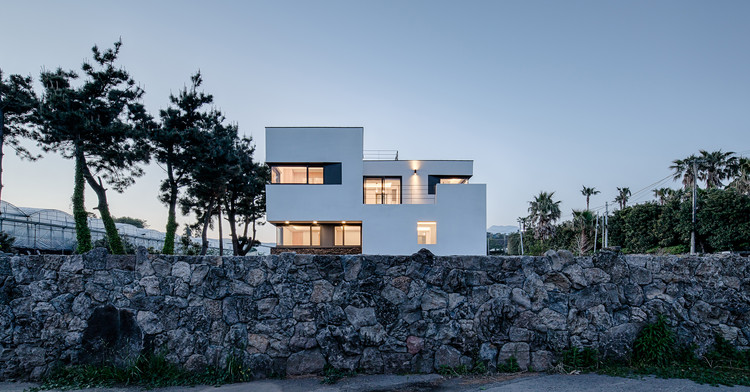 Text description provided by the architects. Situated between the blue sea of ​​Jeju at the south and Halla Mountain at the north, the site had all the scenery of Jeju island. The surrounding environment was so wonderful that I thought it would be enough just to be a part of the scenery. Naturally, the relationship with the sea was the important factor in the design process, I tried not only to build a house in the beautiful nature, but also to bring the beauty of Jeju into the house. In order to fully enjoy the Moon Island and Bam Island floating on the blue sea, the main room such as the master bedroom and the living room were placed at the south toward the sea and the corner window was maximized so that it could enjoy the panoramic view of the sea. However, windows are composed so that the landscape would be selectively framed accordance with the location of the resident.

At the front facade, the lower part of the diagonal line makes the upper part of the house look floating, which gives dynamic mobility and leaves a strong impression to visitors. The white skin, which was cut off from the lump, reacts abundantly according to the light, and makes contrast to the basalt stone surface which was native to Jeju. The room and the living room on the first floor were set back so that the building seemed to float, adding rhythm and depth to the facade and providing a sense of tension, but functionally protecting the privacy from the outside. It would also serve as a eaves to create a cool shade in hot summer and draw warm light deep into the house in the cold winter. Overall, the house is simple, but the look of the house changes according to the different viewpoints.

Black basalt represents Jeju's history and locality. The basalt used in the building and the basalt used in the walls are different in size and stacking style. Compared to bigger exterior stone walls, the small basalt stones attached to the outer walls of the building were labor intensive and time consuming to construct. The landscape of the building where rough, fine-cut stone climbing up the hill makes the scenery of Jeju. The black basalt stone walls on the outside create another layer, creating the effect of separating between the landscape of Jeju and the buildings. From the conceptual point of view, 'the exterior of Jeju was revealed as the white surface cut off', the exterior of the modern building was replaced with a basalt stone wall, and this house would be seen as it had been there for long.