UNStudio has broken ground on their TBC Forum in Tbilisi, Georgia, exploring a “new open, flexible and interactive approach to financial institutions.” Departing from the traditional closed, introverted typology of historic banking structures, the TBC Forum is founded on the design principles of flexibility, and transparency.

Situated in the natural surroundings of the Lisi Lake resort, the TBC Forum is strategically placed to form a contemporary yet respectful interpretation of the historic highland stone-and-mortar village of Shatili. 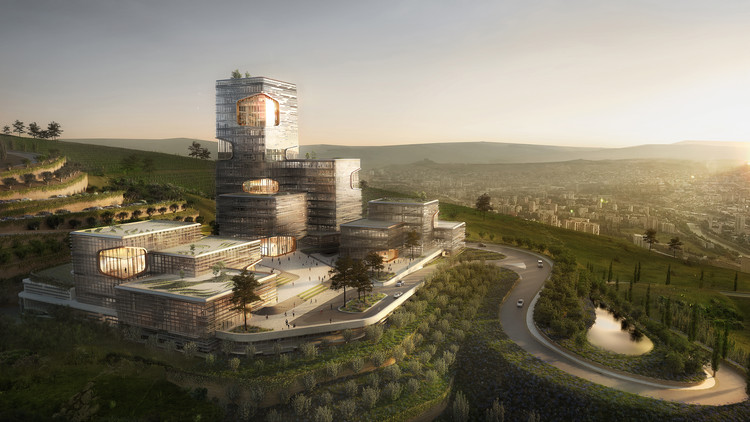 The TBC Forum merges work, culture, and nature in a financial knowledge center and innovation platform, forming an integrated element of the green journey from the Georgian capital through local landscapes and vineyards.

The existing historic village of Shatili, with clustered stone and mortar towers, forms a captivating image of traditional Georgian architecture. UNStudio drew heavy inspiration from the structures, reflecting on their exemplary unification of nature and architecture.

The scheme features a series of flexible outdoor spaces for social and leisure events while connecting the separate buildings to the surrounding landscape. The roofscapes, peaking at varying altitudes, form a “fifth façade of the TBC Forum” with a vertical cluster of landscapes blending into the scenic backdrop.

The Forum is composed of three primary programs, forming three clusters connected around a public esplanade. The TBC HQ will act as the headquarters of TBC Bank, while the Innovation Lab will form a new center for research and idea generation. The Culture Hub will incorporate galleries, restaurants, daycare, and co-working spaces, “enabling interaction between different fields of interest.”

Internally, the TBC Forum’s circulation forms “an integrated and continuous extension to the interactive and social realm.” The towers’ internal programs are organized into clusters and connected by double and triple height social nodes “creating vertical sequences within the building for flexible and interactive socialization and connection.” To this end, a “work journey” is created by elements such as café tables, desks, breakout spaces, stairs, and corridors, offering a flexible approach to collaboration and innovation.

News of the scheme comes weeks after UNStudio designed a transparent, stacked theater for Hong Kong’s cultural quarter, intended as a “celebration of the world of theater.” 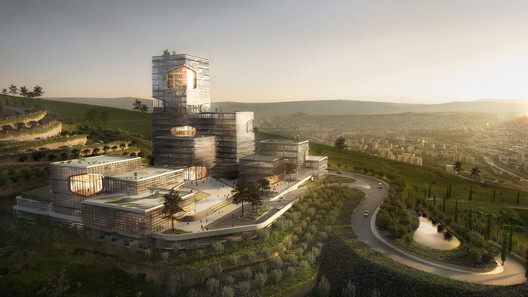