To honor renowned Brazilian architect Oscar Niemeyer’s birthday (December 15, 1907), Slovenian photographer Danica Kus published a series of black and white photographs highlighting Niemeyer’s surviving architecture. The architect, who passed in 2012 at the age of 104, is considered one of the greatest modernist architects of the 20th century.

Kus’ photographs accentuate the hyperbolic curves characteristic of Niemeyer’s design, while also highlighting the geometric harmony of rectilinear elements. In an exclusive interview with ArchDaily before his death, Mr. Niemeyer described his personal definition of architecture: “In my opinion, architecture is invention. And under this prism is how I do my projects, always searching for beautiful, expressive, different and surprising solutions.” This photo series encompasses the subtleties of Niemeyer’s premier works and spans his career.

Itamaraty Palace houses Brazil’s Ministry of Foreign Affairs Headquarters. Located on Three Powers Plaza, the glass facade is encased behind the structural monumental arches. The building is also unique in its position; from specific angles, it looks as though the rectangular structure rises from the water below, floating on its surface.

Considered Niemeyer's first masterwork, the buildings were designed to house an exclusive club and casino. The design emphasizes a strong relationship between building and site. Even in this early example of Niemeyer’s design aesthetic, he is able to use both geometric and organic forms harmoniously throughout the complex.

As Niemeyer’s first project in Europe, his design for the French Communist Headquarters would build upon many of the architectural elements Niemeyer employed in earlier political institutions. A communist himself, Niemeyer was forced to leave Brazil for Europe. The design incorporates many references to Corbusian design, including a thick slab block, Brutalist pilotis, and a glass curtain wall. But Niemeyer manipulated the slab, adding a serpentine curve, creating a structure that is easily identifiable as his own.

The capitol complex, located on the Plaza of the Three Powers, is home to Niemeyer’s National Congress building. The design reflects the strong influence of Le Corbusier, his mentor, while hinting at the more romantic and whimsical forms of Niemeyer’s trademark Brazilian Modernism.

The Tancredo Neves Pantheon of the Fatherland and Freedom, Brazil

A cenotaph located on the eastern edge of the capitol complex, the Pantheon’s overall geometries have been said to resemble a dove taking flight. Following the death of Brazil’s first elected president, Tancredo Neves, the structure was dedicated to him.

The auditorium, which was built to function mainly as a music hall, was constructed out of white painted concrete. The interior is divided into three main areas: the foyer, the audience, and the stage. The trapezoidal shape of the external shell is interrupted by a bold, curved, red marquee, now referred to as “labareda” or “flame.”

The complex features a 1000 person auditorium, a viewing tower, and a domed museum. The collection of buildings also utilize color as a dominant architectural feature to highlight elements of the buildings and their critical circulatory and structural components. 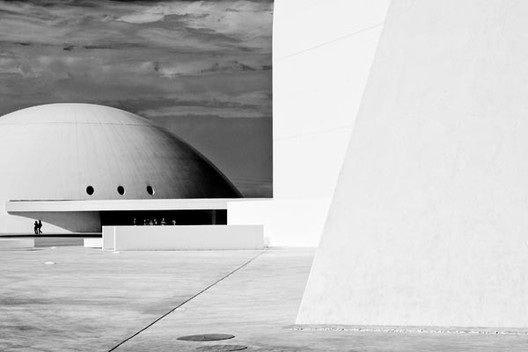