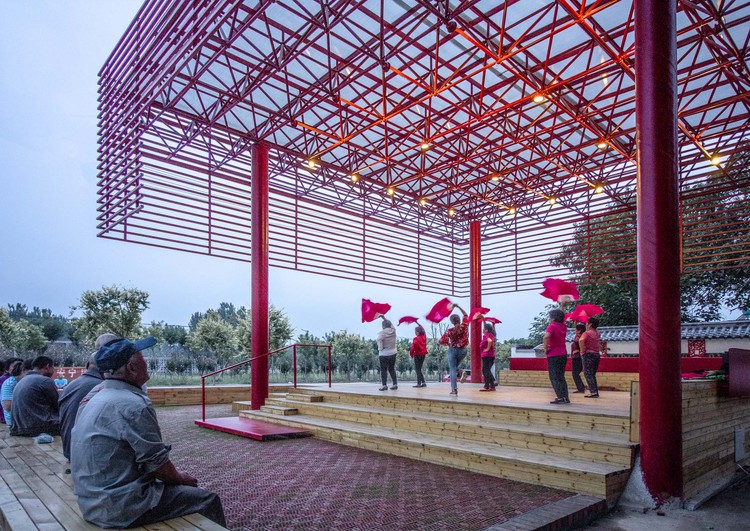 The Background
Drama stages have occupied important position in the cultural life of Chinese countryside since ancient times. Usually a stage is a public activity center of one village. Rural constructions, celebrations, festivals and fires, and villagers' gatherings used to be all centered around the stage, which is playing as a public facility. Even after the founding of the People's Republic, drama stage has not withdrawn from the history. The combination of “stage and rostrum” had once gave this former traditional architectural element new life in modern context. Various sport events, rural elections, festival performances and other activities continue to extend the vitality of drama stages.

However, with the change of rural governmental structure and the invasion of internet life-style, nowadays the original function of stages is gradually fading away. Many large stages invested by villages have been idle for a long time. Their enclosing space character, massive volume and singular function have become increasingly embarrassing in the context of contemporary villages.

The development of cultural facilities is a significant part of the new round of rural development. Numerous rural libraries, cultural stations, grand stages and other cultural facilities have been built under the New Rural Movement. However, most of the facilities have not work effectively to play a cultural role and are mostly idle or even abandoned. What kind of cultural space should rural areas have? What kind of image should the stage present as a cultural rural landmark in contemporary context? By this design scheme we try to explore and answer these questions.

The Scheme
On designing Beihedong stage we hope to discard the over-enclosing space and singular function of traditional stages, to provide villagers new spaces for various daily activities and gatherings. Walls are discarded from the spatial formation, a huge floating skyhook ceiling is applied instead, providing shelter for various activities and integrating existing activities underneath.

A space opened on all four sides is then formed under the suspended ceiling, with the middle raised to form a visual focus, also convenient for performances. The two sides of the stage are raised as seats, where villagers can sit around and chat when there are no performances on. The other two sides of the stage turn into steps providing rest facilities for daily activities. The pavement extends to back of the square, at its edge there are also audience seats. The whole stage is presented in the village in a free, open and communal manner, carrying all kinds of public activities for villagers.

The site is located at one end of the village square, with building walls on both sides of the northwest, whereas square and roads on the southeast. Due to the obstruction of the existing buildings, the idea that the stage should be open on all sides became difficult to realize. Therefore, the two sides facing the walls are lifted upward and then turned into seats, while the other two sides extend outward, forming a small audience area. The whole floor plane of the stage and the roof form a set of two malposed squares, one large and one small, forming a special staggered spatial relationship.

We think rural development does not have to deliberately reuse traditional tectonics and materials, instead, as a growing “living body", it has the right of self-evolution. As a very mature contemporary structural system, steel grid is widely used in large-span roofs. Steel grid structure is also used in the ceiling of this village stage. It takes only two days on site to assemble and complete the whole steel structure, after pre-casted by the factory. The sagging steel grille of the skyhook ceiling acts as a hanging curtain, which makes the whole roof became a floaty-look "umbrella", projecting the site downward with spaciousness airiness.

Red is a favored color in Chinese countryside. The whole roof structure is sprayed with festive red, like a red lantern, which becomes a landmark installation in the village. The Plaza where the stage located is also a place for the rural market. When markets are held, colorful stalls and bustling crowds form a fantastic and mutually contrasting picture of rural life under the huge floating red canopy. At the same time, the red canopy and its multi-functional basement space also accommodate part of the market stalls, integrating the stage with the rural fairs.

The Impact
The stage quickly became a gathering place for public activities once upon completion. Elder villagers enjoy the sun, chatting, playing cards around the stage, where the roofs providing shelter for activities even in rainy weather. At the same time, the stage became a flexible trading center for the rural market, as the benches and steps at the base of its periphery become excellent retail places. Rural development is not to create bonsai; therefore, its design has not to be fully constrained within the forms and materials chasing "tradition" and "inheritance". Sometimes it is perhaps a better choice to honestly serve the realistic and unique demands of current countryside using contemporary techniques as fundamental methodologies. 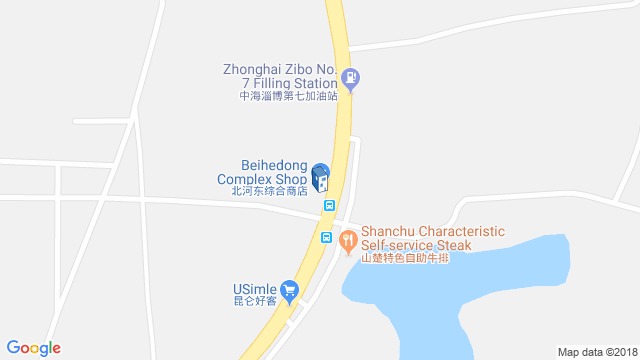 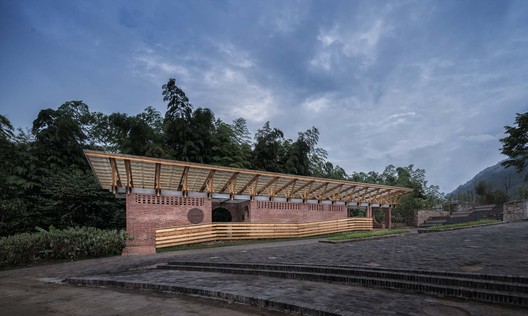 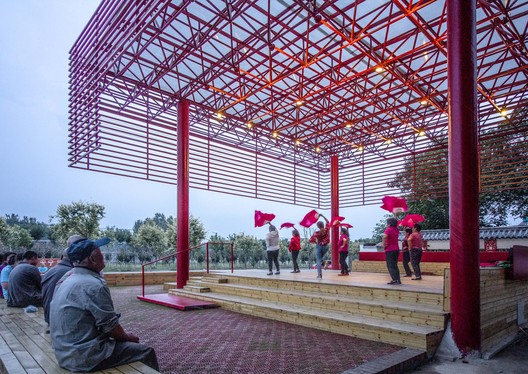