Text description provided by the architects. The house PH2 is a three-slope monovolume, fully dressed in the rusty tin on site, material taken from the rural environment, where agro-industrial buildings abound in various states of destruction. This "architecture without architects" that benefits from the lack of pretension serves us as a material reference, delimiting a stripped and essential formal language.

The history of its development establishes a reflection on the individuality of the assignment and the traffic of ideas that go from one project to another. We made two previous versions of this house, which both were out of what the principal was willing to spend, facing the cessation of the project, we wanted to rethink it based on a scheme proposed several years earlier in the form of the "Chilean House for a Gringo ".

A habitat limited to the iconic and pragmatic needs in an indistinct environment. A postmodern version of the Maison Domino by Le Corbusier to carry in your pocket and install at your leisure. 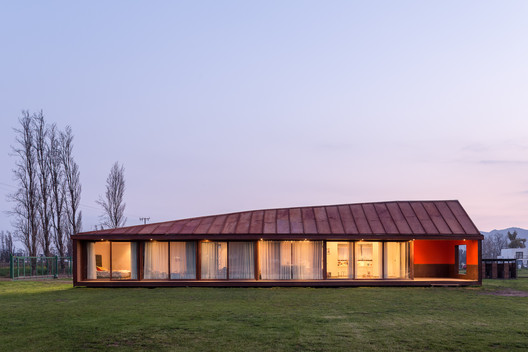