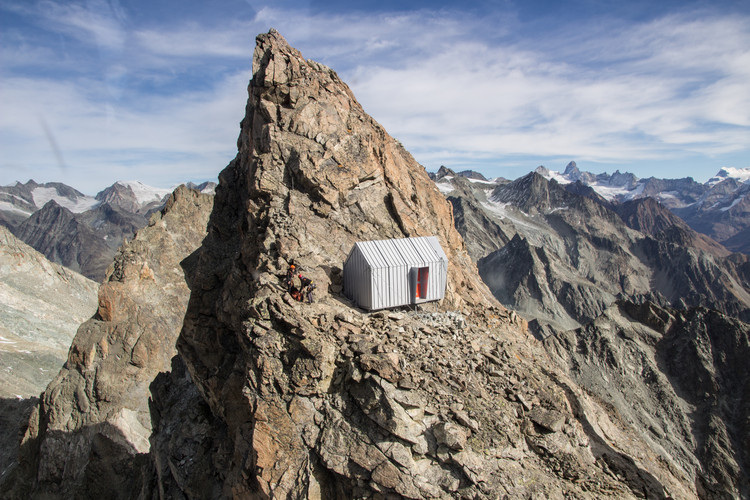 Text description provided by the architects. On the 10th of September 2018 the new bivouac Luca Pasqualetti has been placed and made operational at its final destination, the hardly accessible Morion ridge in Valpelline (northwestern Italian Alps) next to the spectacular rocky hole of Becca Crevaye, at an altitude of 3290 m.

The assignment and the territory
The project of the realization of the bivouac on the Morion ridge in Valpelline (Valle d’Aosta) is the brainchild of the local alpine guides Espri Sarvadzo (“Wild Spirit” in the local dialect). Along the ridge there are some really remarkable but basically ‘forgotten’ itineraries. For example the long traverse leading from the Col of Mont Gelé to Mount Berrio.

The aim of this project is the rediscovery of these places by lightly improving their availability for mountaineering: a simple structure such as a bivouac, positioned in a remote place with a difficult access, is specifically conceived to stimulate a niche alpinism, interested in the beauty of the wild and solitary Valpelline places, conscious of the commitment and respect required by high altitude environment.

Through the cultural association Cantieri d’Alta Quota, the initiative of the guides meets the desire of the Pasqualetti couple from Cascina (Pisa) to dedicate the bivouac to their son Luca, great mountain lover, sadly departed on the Apuane Alps in May 2014.

To give support to the operation, during the Spring of 2017, the voluntary association Montagna Sarvadza has been founded. Its aim by statute is the “valorization and protection of the local mountain environment through the awareness of the strict relationship between man and nature, according to a synergy between culture and environment”.

The Morion ridge divides the Ollomont Valley from the Bionaz one and it is formed by dozens of pinnacles and peaks elevating between 3000 and 3500 meters, from the Col of Mont Gelé to Mount Berrio.

The Morion enjoys a privileged position in terms of landscape, with splendid views on Mont Vélan, the Grand Combin, the Matterhorn, the groups of the Mount Rosa and Mont Blanc, on the mountains of Valais and of southern Valle d’Aosta.

The different itineraries present in this area are constantly immersed in a severe and wild environmental context that thanks to the isolation of the peaks and to the long approaches from the valley floorskeeps its distance from the most popular routes.

The ridge has been explored between XIX and XX century by different alpinists from England and Valle d’Aosta such as George Alfred Topham, Abbé (abbot) Henry, Renato Chabod, Amilcare Crétier, Lino Binel. The Central Morion was the target of the first ascent attempts. Its conquest occurred on August 18th1891, along its east side, thanks to Fredrick Baker-Grabb and the guides Clemens and Zurbriggen.

Today, only a few people try their hands at this true high altitude journey, that requires at least two or even three days, depending on the speed of the roped party. The new bivouac can be reached in around 5-6 hours from the refuge Crete Sèche or from the bivouac Regondi and permits to split the long traverse of the ridge directing from Northeast to Southwest.

The new structure is located near to a rocky ledge at about 3290 m of altitude, close to the saddle between Punta Gaia and Becca Crevaye, with its characteristic hole in the rock.

The itinerary, from the Col of Mont Gelé onward has a high level of mountaineering difficulty, estimated as AD+/D-, including a short section of glacier and mixed (from the Col to the Becca di Faudery, with variable conditions depending on the season), and continuing on the ridge, constantly very exposed, alternating sections with good quality rock to much more movable and unstable ones.

The choice to put the bivouac next to Becca Crevaye was affected by several reasons:

1) The sharp increase in the flow of alpinists coming to the area for climbing or looking for high altitude “modern routes”; the installation of the bivouac extends the possibilities of ascents and itineraries of this type;
2) Reachable through a varied and challenging itinerary, the bivouac represents an interesting destination and base to explore the area, characterized by a remarkable landscape context;
3) The itinerary to reach the bivouac is quite difficult, so it can be useful to go with an alpine guide, thereby valorizing the expertise of local professionals: the goal of the entire process – from the construction to the running of the bivouac – gave local micro-economies a boost, thanks to its network of different professionals and other services and accommodation facilities on the territory;
4) The realization of a base for the complete traverse of the Morion, at about 1/4 of the distance; the installation of a second bivouac (in case data confirm a successful use of the first one), in a position to be defined between Mont Clapier and Punta Fiorio, would permit to complete the operation.

The project and the construction
The realization of a bivouac in the severe Morion environment was an extraordinary design challenge: the setting-up of a structure isolated from any sort of network, able to withstand the continuous combined action of extreme weather conditions (temperatures even below -20°C, wind up to 200 km/h, heavy precipitations and meters of snow on the ground) required construction choices characterized by maximum simplicity and efficacy combined with a great performance in terms of protection and resistance.

The high altitude context particularly inaccessible and remote, characterized by complex orographic and geological aspects, required a careful arrangement of every logistic aspect of such an extreme building site, possible only during a short period of summer and bound to perfect weather conditions, as well as dependent on the careful planning of the construction sequence and transport of pieces, people and equipment.

Every component was sized according to its transport and handling during the final phase of laying and assembly by helicopter, looking for the maximum lightness related to structural solidity.

The bivouac is devised to be completely reversible, following the philosophy of minimal environmental impact. The structure lays on non-permanent foundations anchored to the rock in a punctual and not invasive way through a basement in metallic carpentry and can be removed at the end of itslife cycle without leaving permanent traces on the ground.

All the components were completely mounted dry, without using concrete. They are recyclable and ecologically certified. The high quality of the materials and finishes guarantees durability and wear resistance, preserving the living comfort and reducing future maintenance.

The structure made by composite sandwich panels, wood and steel, completely manufactured in a prefab workshop, can be split in four parts sized for transport and handling, to reduce the number of helicopter flights needed for the final assembly operations at high altitude, condensed in one working day.

The bivouac is designed as a simple hut with two pitches, according to the archetypal idea of the shelter. Moreover, in terms of landscape, a structure with sharp edges fits better the jagged geomorphology of the Morion ridge if compared to the classic barrel shape of the “Apollonio” type bivouacs; the chromatic integration with the surrounding rocky context, characterized by the prevalence of rocks with metamorphic origin, is obtained through the grey tone of the metal cladding.

The interior, interpreted as a cozy and protected shell against the surrounding context, is anthropometrically optimized to live comfortably in a small space. From the distributive point of view, the entrance is located on the side so you can enter from a centered position and create inside the division between day and night areas.

This allows the opening of a huge panoramic window on the main facade facing east which means more sun, more light and a warmer internal temperature besides the possibility to enjoy the wonderful landscape with the Becca di Luseney, the group of Monte Rosa and the Matterhorn.

There is a small external niche at the entrance to help protect the door from the wind and precipitations where sticks, crampons and ice axes can be stored.

The living area, facing the landscape, consists of a table with 8 seats on stools and chests; the fitment integrated in the wall contains the sideboard, a surface for food preparation and many storage compartments for backpacks and climbing equipment.

The night area is located in the rear side and it’s made of two wooden platforms with mattresses (8 beds with blankets). The bivouac is equipped with a small solar panel with a battery for minimal lighting.

The bivouac, designed by architects Roberto Dini and Stefano Girodo – researchers at the Istituto di Architettura Montana of the Politecnico di Torino – in cooperation with LEAPfactory, has been assembled in a carpenter’s workshop in Aosta between July and August 2017; it has been transported by truck near the Lexert Lake (Bionaz) and inaugurated with a big party on the 27th of August 2017 in the presence of the Pasqualetti couple and a lot of representatives from CAI Pontedera and friends from Tuscany.

The works for the arrangement of the rocky ground and the installation of the baseplate have been interrupted due to the upcoming winter and concluded during the next summer in August 2018.

Two teams in action, one up and one down the mountain have completed the transport and the final assembly on the 10th of September 2018, in a single working day.

The event of the realization of the bivouac proved to be an extraordinary catalyst for the meeting and exchange between different people and realities, connecting Tuscany with high Valpelline: a participated process “from the bottom”, accomplished thanks to the generosity of the financers and the willfulness of the volunteers that overcame with few resources huge logistic and environmental difficulties building a small, yet very important, piece to help enjoy and discover consciously such a wonderful and wild territory. 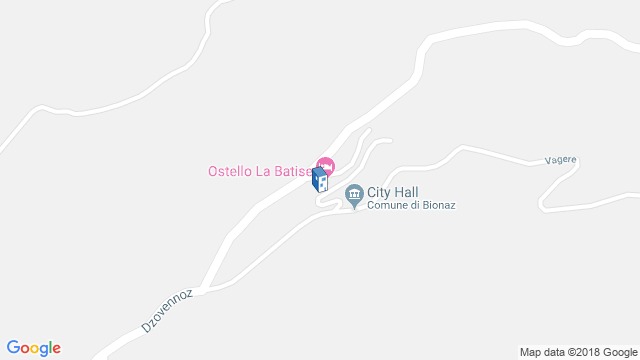 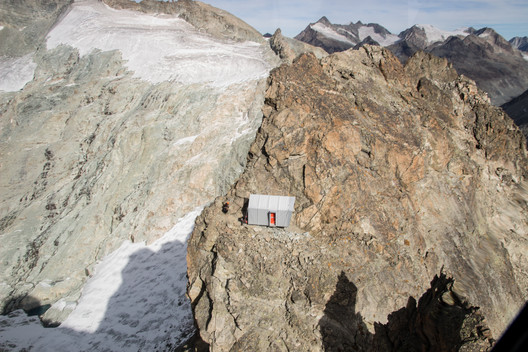 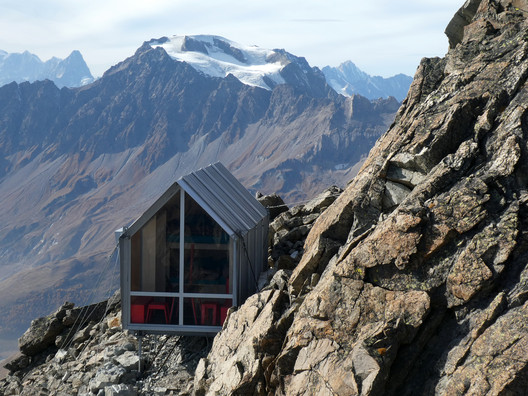 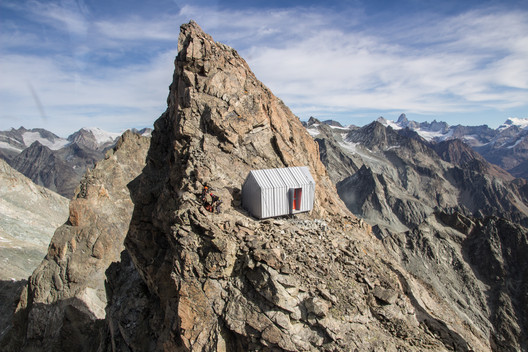