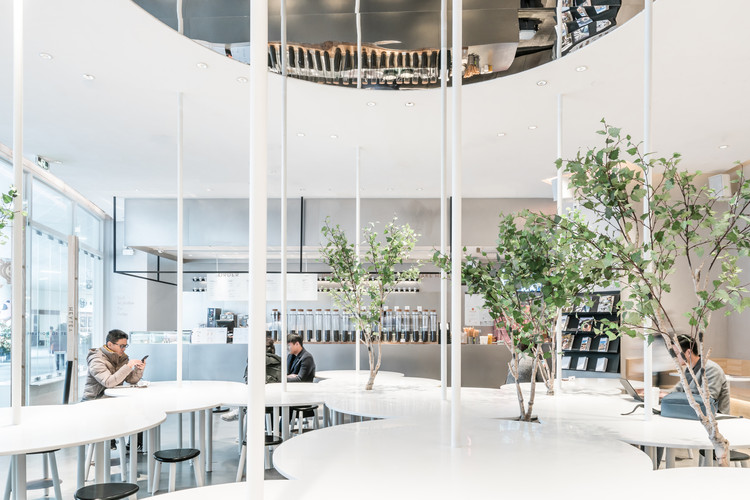 Distance affects the way of communication
Dr. Edward Hall, an American anthropologist who divides four different types of distances from interpersonal relationships, and the renowned socialist Erving Goffman defined “to meet” as "the constant mutual attention of people in public places."

In the social space, at the same time, the positions of similar individuals who share similar characters, interests and practical activities are also close. A small-scale space makes people feel close to each other, however a large-scale space has greater inclusiveness and possibility.

The ways of communication produced by different distances between people are respective, and the relationship between distance and human activities is also ubiquitous.

Exploring the Social Relationship in A New Age
In the traditional tea-drinking spaces, distributed seating provides a way for people to communicate privately. The Heytea DP123,  as a series of presentations, takes aim at exploring the distances between people in reality for our new era and another way of "siting down.” In Heytea, one can relish his or her tea freely and privately, a couple is able to enjoy the romance of the only-us-two world , and a group of people can also rejoice together.

As a result, Heytea is not only a tea shop that satisfies your appetite, but also represents a new way of socializing in a space.

HeyteaDP 1(Shenzhen Uniwalk) "Believe it, you will meet."
In order to jump out of the closed box, one big table constituted by19 small tables with various sizes shortens the distances between different groups, providing them with the possibility of interaction.

Different ways of sitting, including sitting face to face, sitting oppositely and sitting around, appear in the same large space, making the privacy and the openness coexist, so that each consumer can gain a different sense of space every time they enter the store.

Heytea DP2 (Shenzhen UpperHills) “Streams in the Valley"
One of the most popular and elegant things for the ancient Chinese literati to do was to drink wine from a winding canal with one wine cup floating on it( which is called Qu Shui Liu Shang in Chinese.) According to the special spatial structure of the store, the designer tries to use a natural curve to connect different positions in the space, not only making full use of the space, but also creating various spacing between people.

Customized streamlined table naturally spreads out from the inside and transfer into a “stream." On both sides of this “creek in the valley”,  more than 30 guests can be seated, with interspersed green plants and undulating ceiling just like the rippled water.

Heytea DP3（Guangzhou Central Tower) “Beyond the mounts, and people beyond”
Beyond the Mounts is Heytea’s third store of the DP (Daydreamer Project) Series. Continued with the design concept of the previous two, the space is carried out experimentally in order to explore the way how people gather and scatter in the shop. Differing from the ordinary tea shops with seats spread out, the long tea table that goes through the whole space makes the aggregation of the customers possible.

Additionally, the structures that represent the layering hills in the cloud world, which is a classical scene in the Chinese traditional ink-and-wash paintings, upheave irregularly on the top of the table, and meanwhile, divide the tea drinkers into various sections functionally.

Curved and mountain-like ceiling above,it seems like that customers are placed in the scenario created in the renowned ancient painting, Spring Mountain and Auspicious Pines, by Fu Mi of Song Dynasty: in the valleys teemed with cloud and mist and mountains shadowed by the greens, a sip of tea is taken on each seat. 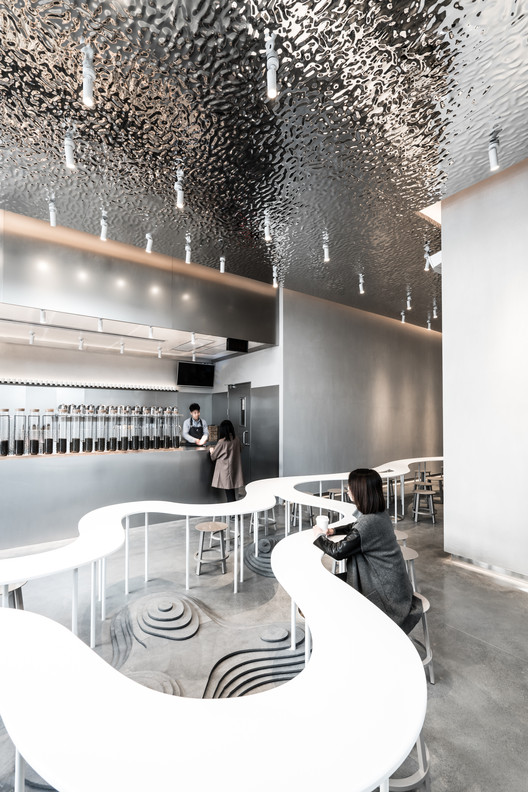 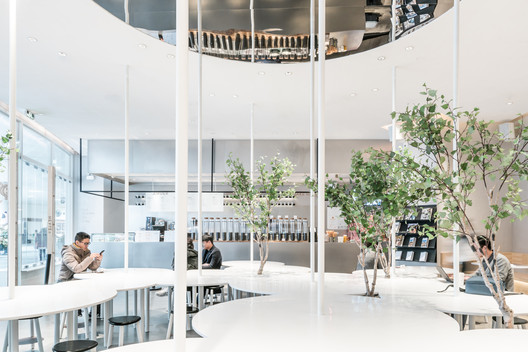