MAD Architects has unveiled images of their proposed panoramic viewpoint for the Fenix Warehouse in Rotterdam, commissioned by the Droom en Daad Foundation. The scheme represents MAD’s first public cultural project in Europe, which sees them tasked with uncovering the forgotten history of what was once one of the biggest warehouses in the world.

The viewpoint is to form part of a restoration project of the historic warehouse itself, to be led by Rotterdam-based Bureau Polderman. The scheme is situated on the site of one of the oldest Chinatowns in Europe, on the southern banks of the port of Rotterdam.

We are proud to realize a dynamic transformation of the historical warehouse that will encourage people to move through the space, and be enjoyed by the community. It will lift body and mind, and be a place of pleasure and contemplation. The Fenix will inspire wonder and exploration about the past, the present, and the future.
-Ma Yansong, Founder, MAD Architects

In addition to the platform, MAD will also design a theatric staircase and public atrium for the warehouse, connecting the ground and first floors with the rooftop observation deck. The first floor will be dedicated to highlighting Rotterdam’s long history of migration, reflecting on the area’s role as a departure point for millions of European migrants bound for Ellis Island in the United States.

The Fenix Warehouse will become a landmark for all those millions who left Europe from the banks of the Maas, and for everybody arriving today. It offers a great future for Rotterdam’s past.’
-Wim Pijbes, Director, Droom en Daad Foundation

News of the scheme comes after MAD began construction on a Floating Kindergarten above a historic Beijing courtyard. 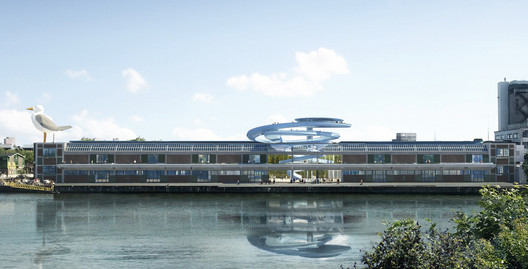