Save
The Frame / KAGA Architects & Planners 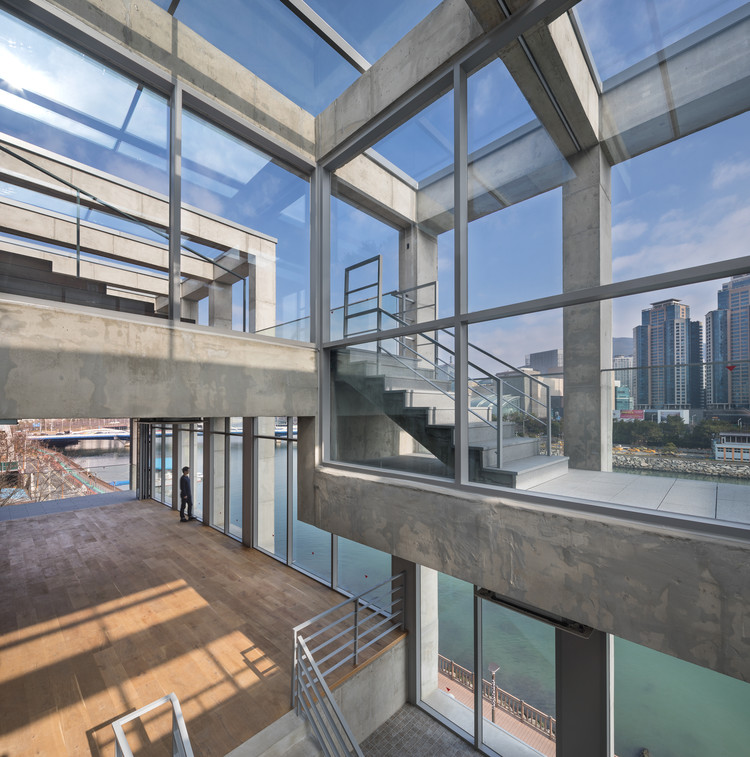 Text description provided by the architects. A design plan is the result of thinking about ‘How will it be seen?’ and ‘How will we see it?’ The interference with the existing landscape was minimized by composing only with the externally exposed structure and transparent walls.

A minimal structure that consists only of a colonnade and floors was formed, following the shape of the 40-meter long and narrow site that continues along the Suyeong River. The exterior formed a facade that casts a deep shadow by revealing the structure, and the interior aimed for a homogeneous space with the maximum area and no pillars.

By forming the pilar as a structure and the pillar as a decorative element of the facade in the same shape, the boundary between the two was blurred. As a result, when seen from the inside, the classification between structural pillars and decorative pillars becomes ambiguous and they exist as a frame that holds the landscape. Each of the frames distinguish the landscape, creating a rhythmic sense of a narrow and long space. The frame that forms the building, depending on how it is seen, becomes an ornament or a decoration.

The site is located where the cityscape of Centum City and Marine City, as well as the Suyeong River and the waterside scenery that only Suyeong has can be seen. Since 4~5 cafe buildings are placed on a scenic area along the river, at the foot of the Suyeong riverside hills on the opposite side of Centum City, it is interpreted as one scenery with the hills at the back as a background along with the Suyeong River.

Soil excavation is concomitant since the shape of the site is a narrow and long indeterminate form that faces the front road and meets a steep slope at the backside, however, an opportunity to meet with the forest is provided. As a result of the mountain having many hard rocks, the emergency staircase area is difficult to excavate. Therefore, the space is used as a gallery by changing the floor height.

The uses of the building consist of a coffee shop (1st and 2nd floors), a restaurant (3rd floor), a black tea specialty store (4th floor) and a rooftop. There is also a gallery that uses the lower part of the first-floor staircase that changes direction on the second floor and connects to the outside.

Considering the fact that the plane is a small-scaled lot, the parking tower and the core area was attached, and the view on the front side and the forest at the backside was drawn in, but the shape of the site was followed. By processing the building front as a curve, which follows the shape of the slightly protruding front side, a movement is created in the frame.

Taking the functionality of the cafe into account, the kitchen is installed where the depth is deep, a long outer wall is placed in order to secure the view, and the outside space is met byplacing terraces at the left and right ends of the whole floor, in order to minimize the visual interference, the front road side was designed with transparent walls that exclude opening/closing windows, and ventilation and the view was solved by placing folding doors on each side. The stair hall, following the flow of circulation, holds the stratum that the land already has as well as the surrounding landscape, and as a space that is open to the sky, it was also made to operate as not just a simple passage, but also as an exhibition space.

The form starts as a frame that connects the river and the forest. This frame is adopted from a module that places a table in a relatively spacious manner, and it is also a device that visualizes its function by extending the external impression to the interior. the change in the interior lever is represented as an external form by varying the size of the frames. The building was aimed to become one of the sceneries when seen from across the river, following the shape of the surrounding buildings and appearing as a figure that connects the nodule of rocks that existed on the extant land.

Also, this building won the Gold-prize of Busan Architecture Awards. 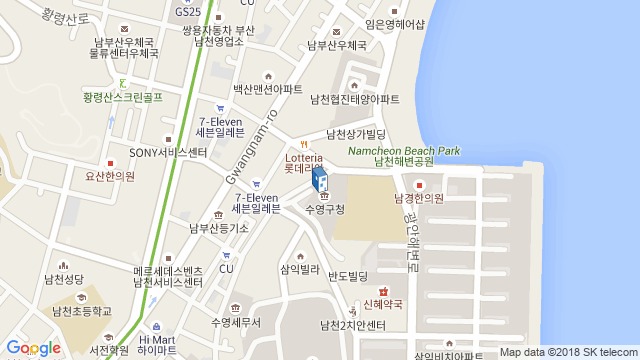 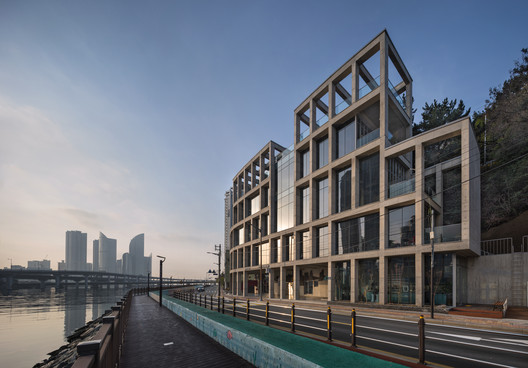 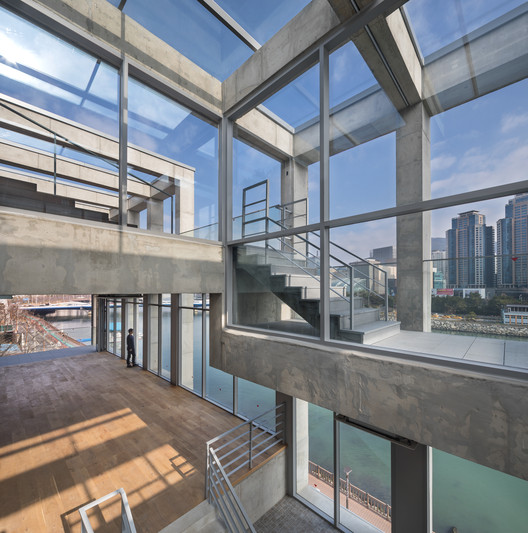