Text description provided by the architects. The Lodzia factory building, built in 1923 is the only industrial building of its kind in Israel, built in modern technology integrating 19th century European nostalgic references, while searching for a new Jewish - Zionist style. The building has remained a landmark to this very day. Its reddish color and unique shape, is different from the rest of the buildings in the city. The old Factory was built by Polish immigrants from Lodz, imitating the industrial typology that was familiar in their home town.

Any additional areas essential for the new program could be done only as unseen additions and only underground. This led to the planning of two basements under the whole lot.In order to build the basements under the historic building, a temporary support system was planned for the existing structure, using hundreds of steel poles embracing the existing walls and foundations. This method enabled to disconnect the original foundations and conduct the digging works. The building was monitored with electronic sensors until placed on new foundations.

The building’s facades were accurately preserved. The factory was built in two stages – the first wing in 1924 using red bricks and the second in 1929 with white ones. During the preservation works, the red bricks found on the site were sliced into two and were used as cladding wherever those were missing in the first wing. The white colored bricks which were scattered around the building were collected and reused in the preservation works.

Since the original building had no blinds, the widows’ opening direction was changed in order to allow the installation of interior shading solutions for privacy and light regulation. Instead of adding window bars to the openings on the ground floor, a concealed alarm system was installed inside the window and door frames.

In the collective memory, the building's roof is perceived with red “Marseille” roof tiles that where common in Palestine during the 1920’s. In the drawings found in the city archive of the original building from 1924, a two-toned diamond shaped tile pattern was planned. Historical research led us to restore the roof in two-toned zinc tiles: light gray (new zinc) and dark gray (aged zinc) - as a tribute to the historical building. A balcony was designed inside the roof volume with unique planting details, serving the apartment on the upper floor.

The two iron staircases on the Eastern Facade, one for each wing, were the only original access between the floors of the old factory. These staircases were carefully dismantled and treated by a master craftsman. One staircase was converted into emergency stairs while the second was reused as two balconies.

In order to preserve the building’s authenticity, the two building stages were emphasized while adapting the building to contemporary needs. The project was completed in the summer of 2018 and was populated by the owners soon after. 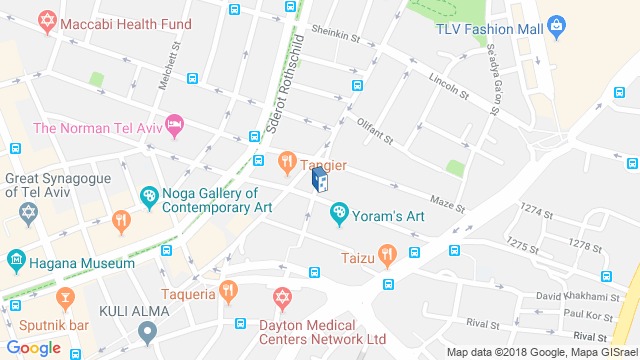