In the wistful irony of creating liquid fire through sheets of paper, David Oliva of Barcelona-based firm SP25 Arquitectura and Anna Juncà of Atelier 4 collaborated to fabricate an installation piece for the LLUÈRNIA festival of fire and light in Catalonia. Titled, "Origami Lava", the field of flame cloaks the 100 m2 surface of an abandoned building using over 10,000 pieces of origami. 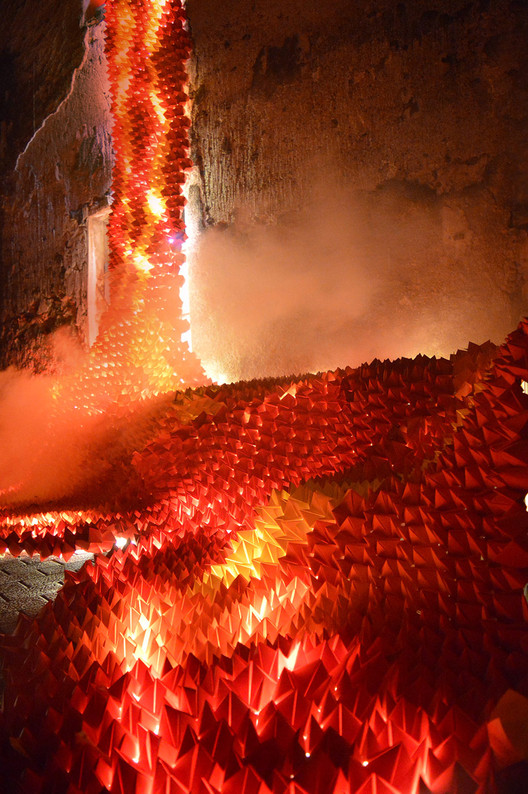 Drawing inspiration from the natural environment of Olot, a town native to dormant volcanoes, the eruption of the incandescent lava illuminates the otherwise pitch-black night. The ephemeral experience is generated by positioning a series of lights throughout the site coupled with the use of smoke machines to synthesize light and heat.

Oozing across multiple storeys between the facade of the building and past the terrace below, the lava comes to life as a singular entity from the array of origami elements. The photographs encapsulate the mysterious glow of the "lava mat".

Shades of red, yellow, and orange tinge the paper to create the look of the wild flames. The individual origami itself is folded similar to that of children's classic fortune tellers, however, in this context the four tips of each element is reflective of the urban topography of the environment.