Save
Work Set to Begin on Miami's Answer to the NYC High Line, Designed by James Corner Field Operations
Share
Or
Copy

The project, in the works for the past five years, was launched by neighborhood activists, with enthusiastic support from government, businesses, and citizens. The James Corner Field Operations masterplan envisions 10 miles of parallel, separated pathways for pedestrian and cycle use, dotted with lush landscapes, native plant species, and connections to parks, gardens, and playgrounds.

The scheme is reported to cost up to $120 million, with $90 million currently secured by Friends of the Underline. It is estimated that the scheme will positively impact on an immediate 125,000 people living within 10 miles of the trail, while also promoting Metrorail use above.

The first phase, currently under construction, is expected to cost over $14 million, and presents the most complex, expensive section of the project. It is however predicted that the area’s young population and high density will mean the scheme will receive immediate and heavy use.

The first phase will offer such amenities as a green, dog-friendly park, gym, three-block promenade, and butterfly gardens. Phase 2, set to go out to bid in November. 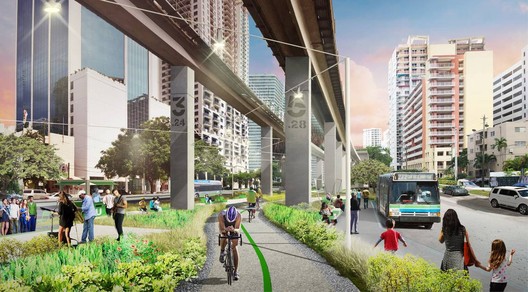