The abrasive wire-cutting method can accelerate the production time of conventional formwork by a factor of 126, while reducing the amount of concrete used by up to 70%. Despite these impressive stats, the technology has been developed to preserve and enhance design freedom. 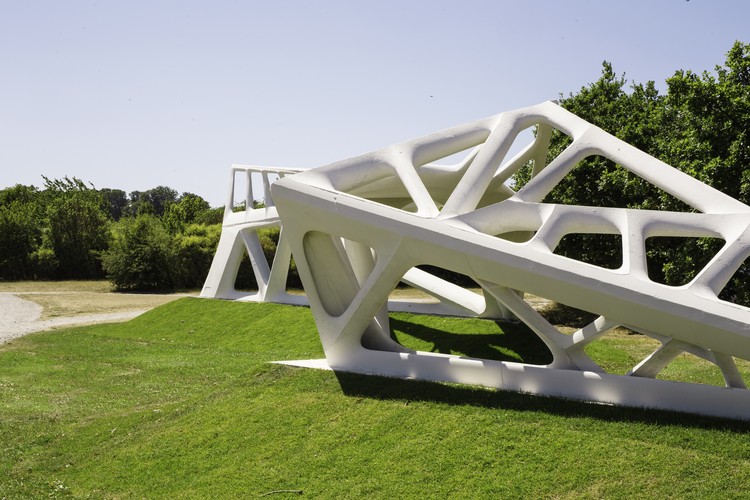 The concrete form is generated using an electrically-driven abrasive wire, rotating at high speed around a carbon-fiber frame mounted on an industrial robot. An Expanded Polystyrene formwork was used during the experiment, due to its low cost, and popularity in construction insulation.

The software and hardware advancements made during the project culminated in the first topology-optimized structural design in Ultra-High-Performance Concrete. While topology optimization is a common consideration in aeronautical and automotive industries, the Aarhus experiment represents the first example of the technology’s practical, economic, and complex geometric properties being engaged with by architects.

The example set by Aarhus could now pave the way for a large-scale adaption of the topology optimization and robotic abrasive wire-cutting methods, “enabling a revisiting of global concrete construction.” The technology is currently in the advanced stages of commercialization, with plans to package the technology into a shipping container to create a mobile pop-up manufacturing plant called “Factory on the Fly”. The scheme aims to be commercially operational by July 2019.

What excites me, in particular, is the radical design potential of this approach. We are used to thinking of environmental concerns as something that constrains design quality. But here the opposite is true – using less material we get more evocative structures, rendering their forces visible to the observer through their articulation.
-Torben Nielsen, Dean of Aarhus School of Architecture