London is one of the world’s most iconic and beloved cities, with a diverse blend of architectural styles spanning the centuries. Every year, 20 million tourists flock to the city in search of iconic landmarks such as Big Ben, the Palace of Westminster, the London Eye, and Trafalgar Square.

But London could have been so different. Through time, a host of ambitious, crazy, and revolutionary plans were drawn up around the city, only to be consigned to an unbuilt history. To demonstrate this, Barratt Homes has unearthed plans for “some of the capital’s most ambitious construction projects that never saw the light of day.”

We have republished the images and shortened descriptions from Barratt Homes below. Be sure to visit the official website here for more in-depth reading.

Barratt Homes: In the late 1960s, bus use within the city was on the decline, with residents of London preferring to commute via personal vehicles, causing congestion […]the plan was to get rid of them altogether, with the Central London Monorail taking over public transport duties.

Barratt Homes: Back in 1934, plans were drawn up for an airport above the River Thames to provide London with a new transport hub in the heart of the capital – ideal for national and international business travel. As the design from Popular Science Monthly (1934) illustrates, this airport would have been situated right next to the Houses of Parliament, in between Westminster Bridge and the relatively new Lambeth Bridge.

Barratt Homes: Approximately two hundred years ago, plans were put in place to build a 300ft pyramid right in the center of London to commemorate the victories of the Battle of Trafalgar and the Battle of the Nile. Blueprints for the monument reveal that the building was to be taller than St Paul’s Cathedral, with 22 steps paying tribute to each year of the two Anglo-French wars.

Barratt Homes: The Carlton Hotel was a luxury establishment, leaps and bounds ahead of its competitors – the most notable of which being the world-famous Savoy Hotel. Unfortunately, severe damage caused by bombings during the Second World War meant the Carlton Hotel closed to guests. The Hotel was finally demolished in 1957, following voluntary liquidation.

Barratt Homes: In 1851, in the midst of a manufacturing boom, England hosted the Great Exhibition in Hyde Park to showcase over 100,000 revolutionary and contemporary creations to its trading partners from around the world. All housed in a huge temporary structure made of glass and iron, the building became known as the Crystal Palace […] However, before the Crystal Palace was moved to Sydenham, an alternative proposal was put forward on what to do with the huge amount of glass and iron. Charles Burton pitched a 1,000ft skyscraper not too dissimilar in design to the modern skyscrapers we see today. 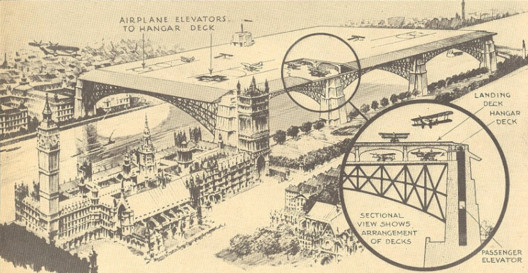