Where the Chicago River meets Lake Michigan, a pivotal node in Chicago’s cityscape, bKL Architecture has designed three towers along the waterfront, which connect the natural elements of the landscape with the urban center and neighboring communities.

The urban development is located at a prominent junction utilized by both pedestrians and automobiles; the site’s new master plan separates the two, providing seamless integration between the active green space surrounding bLK’s three towers and the lakefront.

The placement of each of the three towers optimizes the surrounding green space. To integrate the towers into the landscape, bKL Architecture worked alongside Claude Cormier + Associés, a Canadian landscape architecture and urban design firm, to design the structures into a surrounding park and green space.

Tower One, the tallest tower, utilizes triangular geometries while growing larger at the top to enhance views along the lakefront. A similar design tactic was used for the other two towers as represented by their curvilinear geometries and faceted skin.

Once a busy port, Lakeshore East has transformed into a bustling neighborhood. The addition of bKL’s three-tower complex will provide the neighborhood with additional retail spaces at the base of each tower, as well as the residences above. 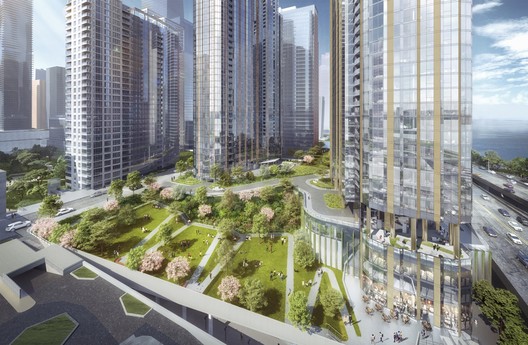