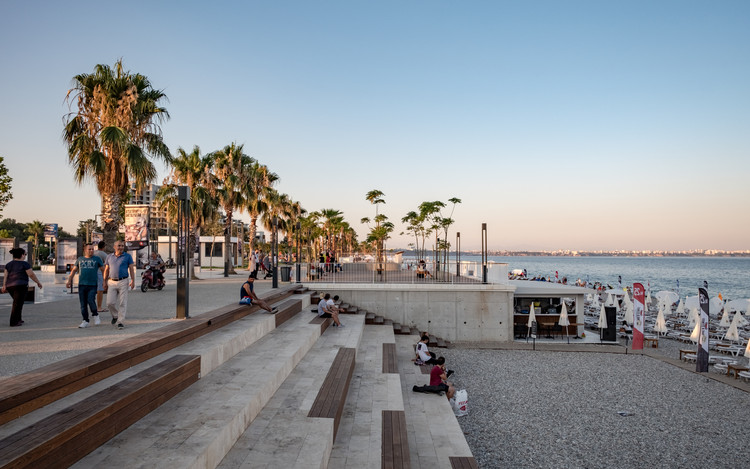 Text description provided by the architects. The first phase of the Antalya Konyaalti coastline rehabilitation project, which covers an area of approximately 100 hectares has been opened to the public on 15th of June, 2018. This area was the subject of a national architectural competition opened in 2014 and Ozer\Urger Architects’ proposal was the winning design to be implemented in collaboration with Tugay Architects.
The Mediterranean Avenue was the first executed phase of the Antalya Konyaalti coastline rehabilitation project that also includes the Museum Square and Variant, Beachpark and Olbia Square as four different characteristic areas.

The main drive of the project was to reduce the domination of the highway dividing the coast and settlement behind it. For this purpose, a series of thematic focal zones were created between the port and the museum to diversify the city's existing hub system on the western coast. Another goal of the project was to strengthen the relationship of the residential neighbourhood with the coastline. The recreational, cultural and sporting activities offered to the residents of the settlements were added to the project along the coast for this purpose.

The pedestrian-friendly vehicle traffic, as well as the infrastructure for a better public transport and bicycle transportation, were established in the project while maintaining the existing vertical and horizontal connections in the area. Architectural proposals that provide accessible and perceivable space for all types of users have been developed and the coastline has been reprogrammed with multiple and mixed uses including recreation, sports and cultural activities. Urban landscape elements are designed as modules with different functions. Urban furniture, shadow elements, activity points, water and plantation landscaping elements that also provide seating and reclining functions are placed within the hard, semi-hard and soft landscape surfaces.

MEDITERRANEAN AVENUE
The Mediterranean Avenue is an important recreational area for the city despite the heavy traffic. With this rehabilitation project, the route from Olbia to the Taurus Creek was reduced to a narrower two-lane road and the parking lots were reorganized.

Thanks to the redesigned road geometry and surface material, the traffic was slowed down and the Mediterranean Avenue became a more pedestrian friendly route. On the other hand, the green corridors between the residential areas in the north were extended to the shore and these corridors were terminated with green areas on the coast.

A vibrant, accessible and rich urban life along the coast was designed with a program chain and with a menu of activities with different focal points. The activities in this menu were placed on the wide strip parallel to the Mediterranean Avenue. This design idea also provided the flexibility to add and remove menu items according to the requirements and demands that can be changed in the future.

MUSEUM SQUARE
The Museum Square is the entrance gate to the coastline for the citizens of Antalya. The urban renewal project of Ozer\Urger Architects aims to integrate this square with the museum garden. In addition, the viewing platform located 40m above sea level has been redesigned and integrated into the museum square.

BEACHPARK
Beachpark, as one of the important and active points of the coastline, includes shopping, F&B and entertainment facilities.
Instead of the old over-expanded commercial booths, smaller kiosks are proposed in this part of the project to enhance the link between the grove and the coast. Two elevators have been added to provide vertical access to the cultural park area, two public spaces have been merged and portable wooden paths have been installed to provide easy access for disabled people and for parents with buggies. The green area in this area is increased by 30% with the newly planted trees and plantation.

OLBIA SQUARE
Olbia Square on the Dumlupinar Avenue was planned as a city square that also acts as a gateway with sports, entertainment and cultural activities.The interactive water show in the square offers a cool sunbathing opportunity alongside fun. Multipurpose sports fields provide sports and entertainment infrastructure for all ages. 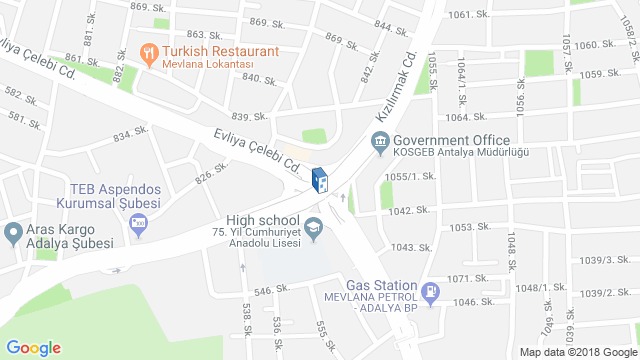 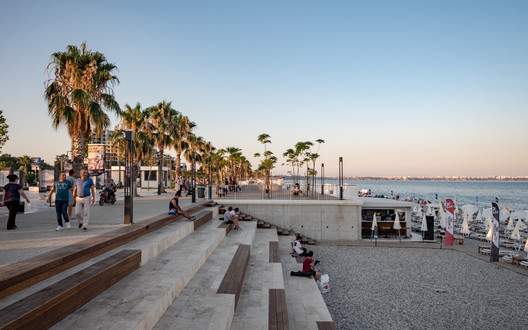