Zaha Hadid Architects, working in collaboration with Russia-based TPO Pride Architects has been selected as one of three consortiums to realize the Rublyovo-Arkhangelskoye neighborhood in the West of the Russian capital Moscow.

The team will work with fellow winners Nikken Sekkei, UNK Project, Archea Associati, and ABD Architects to develop 4 million square meters of new buildings over 460 hectares. Over one-third of the new neighborhoods will be parklands and forest bordering the Moscow River, with a centerpiece 30-hectare lake.

The urban region will include homes for 66,500 residents, as well as schools, clinics, transport infrastructure, shopping districts, and 800,000 square meters of office space to meet the demands of Moscow’s financial, consulting, and legal sectors.

The masterplan is in response to rapid projected growth for Moscow, whose population has increased by 30% in the past 20 years. The project seeks to accommodate the city’s population growth without increasing congestion in the city center, instead installing a 19-kilometer metro line linking the two centers.

The masterplan is to be a “global benchmark for smart, sustainable cities” integrating electric mobilities, services, and smart technologies, with the natural world, permeating through the heart of the city to create “an urban environment of ecological technology that seamlessly integrates natural and human-made systems."

Working with specialist teams in Russia and Europe, we developed a people-centric design for a smart interconnected city that brings people together not only through innovative technology but also through organising the public realm; building a community that integrates the natural aspects of the site with principles of openness and inclusivity in high quality architecture suited for the 21st century.
-Christos Passas, Project Director, Zaha Hadid Architects 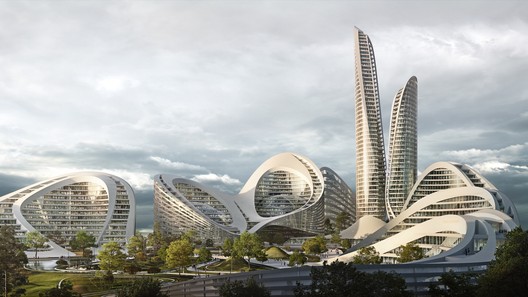