Allied Works has, since their founding in 1994, become known for their portfolio of delicately balanced and civic-minded works. Their Clyfford Still Museum in Denver has in particular been recognized in numerous awards and publications - but may perhaps be overshadowed by their most recent built work.

The National Veterans Memorial and Museum, located in Columbus, Ohio elevates what might have been a staid and somber program into a public space with an urban outlook. The museum, composed of intersecting white concrete bands, opens onto a lustrous landscape (designed by OLIN) and connects the formerly neglected riverfront to the small city’s downtown.

The project is a triumphant moment for Columbus’ riverfront development efforts (efforts now nearly decades in the making.) And the museum’s striking design is an essential ingredient. “The desire for the building was to create a symbol to draw people across the river,” Brad Cloepfil, founder and principal of Allied Works, told Metropolis Magazine. “Part of the monumentality of this form, of these large cantilevers and woven concrete arches, is to have a larger presence.”

Given its public-facing program, accessibility (not just visibility) was a great concern for the design teams. “We needed this to feel like a memorial in a park setting, yet still have presence at the street level,” explained landscape architect Laurie Olin, founder and principal of his eponymous firm.

While the project may be built, its public life is only just beginning. Says Cloepfil, “what space does more than anything…when it’s powerful, is move you to pause, move your soul, and opens you up to ideas.” Read Metropolis’ full review of the project here. 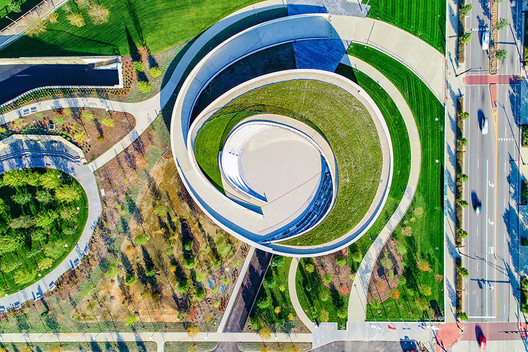