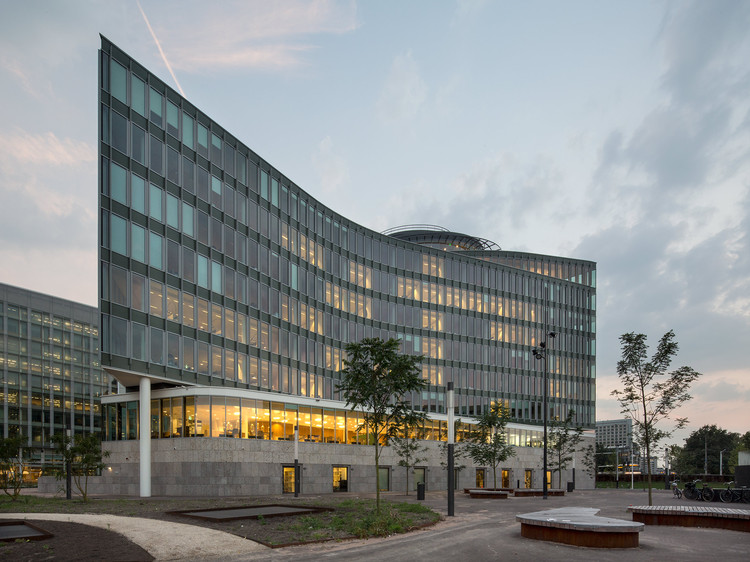 Text description provided by the architects. Stibbe headquarter’s urban context is characterized by the variety of spheres and different scale levels: to the east, the location is a continuation of Amsterdam’s South Axis, whereas the north side is mainly characterized by the A10 highway. On the west side the Beethoven Street is the main route to the city centre while the east side is situated in the Beatrix Park.

Characteristic of the urban design are the organic footprints. This visual language allows for the park to find continuation around the buildings and to be visible and palpable from the Beethoven Street. The flowing lines of the romantic, classic English garden like Beatrixpark, find continuation in the architectural appearance.

The volume of 14.500m2, with its 9, rather high, levels, has a scale that participates in the definition of the skyline of Amsterdam’s Zuidas. The observant viewer also quickly recognizes the human scale in the outspoken transparent plinth, where natural stone and glass are the dominating materials, but also when looking at the floors which, while one goes up, disappear, deflect or are provided with setbacks. Crown to the building is the oval conference room which has been extra articulated and lifted by means of a steel frame and a canopy.

The most public functions are located on the lower floors. A café is placed at the south west corner, a 100 seat auditorium is located at the park side, giving visitors the possibility to step on the terrace, slightly elevated from the terrain. The building’s restaurant is placed on the first floor, in close communication with the terrace and the auditorium.

The middle part of the façade is made of curved curtain glass walls with vertical aluminium elements for shading which, depending on where one stands, show the building in always a slightly different way.

The upper levels, in which set backs are created, are reserved for external meeting areas and, on the top floor of the building, the oval partners meeting room.

From the inside, the building is organized around a triangular 8 floor high atrium. Open office spaces, as well as communal areas are organized around this atrium, providing spectacular views and transparency, symbolic for the way lawyers nowadays work. Natural stone, glass, wood and steel are the dominating materials for this atrium in which the steel structure is the main, eye-catching element.

The high-end interior is designed by Fokkema & Partners. An inviting signature was developed for the lobby, the auditorium, the coffee bar, the company restaurant, the library and the full-service meeting facilities. For the central atrium, special acoustic panels were designed. The pattern that was developed emphasizes and reflects the buildings impressive steel structure.

The addition of voids, stairs and design with attention to vistas attributed to the sense of openness. Due to this, the visitors experience has become a journey through the building in which the view of the central atrium, is phenomenal. Stibbe Headquarters got selected by the WAN Awards 2018 and is put on the shortlist for best Commercial building of the year. 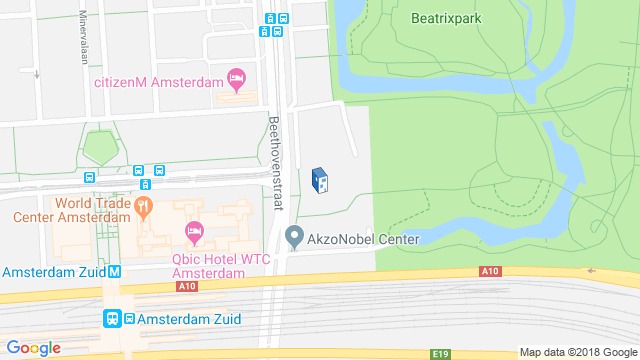 Location to be used only as a reference. It could indicate city/country but not exact address.
Share
Or
Copy
About this office
JCAU B.V.
Office
•••