Save
The Village Home / s+a.D Studio 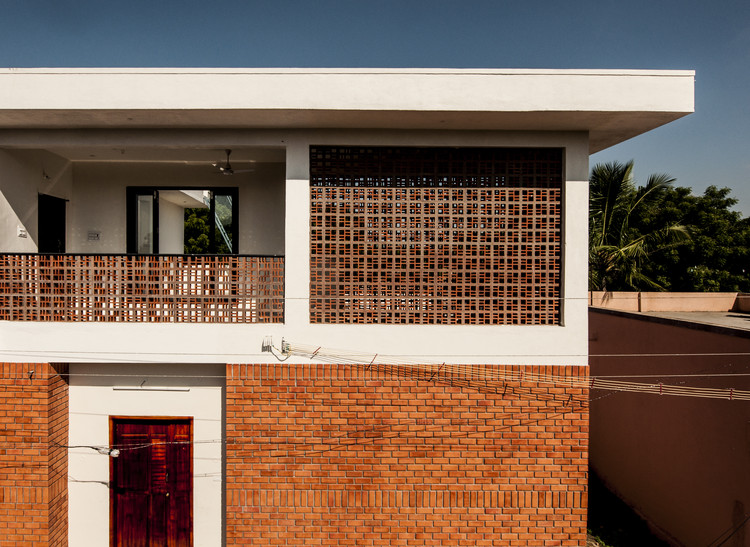 The Context
Minambur is a Muslim dominated village in the Southern part of India. The village was formed during the time of Raja Tej Singh of the Gingee Fort and the residents of the village comprised of both the chief officers and the workers of the King. The houses in the village are now more than 100 years old. One family from the village decided that it was time for them to upgrade their living conditions but at the same time not change their lifestyle which was influenced by many cultural and sociological factors. A decision of such nature was a huge step for the residents of this village and they hoped that their move would encourage other members to also come forward and better their living standards. The project had to be carefully evaluated due to economic constraints. The idea was to provide a design that would help them break free from the societal restrictions while at the same time retain the cultural values of the village.

Typical Architecture design of a Minambur House
The spatial planning of the house was a result of many cultural and sociological factors. Most of the houses were constructed in the early 1900s. None of the houses had any windows on the exterior walls which resulted in the ventilation being dependant on a courtyard (aangan) that took up the major part of the house. The reason for this was to avoid people to have views into the house. The house was divided into multiple layers. Only known people were allowed to enter the house while the other visitors were entertained at a small Thinai (seating) space near the entrance of the house. The courtyard became the second layer and was used during the summer evenings and nights for relaxation. A corridor running around the courtyard separated it from the more intimate living spaces which were restricted to family members and the women of the house. The women were not allowed to use the front entrance of the house but a back exit was provided which would let them leave the house. Ornamentation was not a key feature of these houses and they were more functional in nature. Locally available stone was used as structural columns while the roof and the windows were made of good quality teakwood that is still in good condition.

Design Concept
The users were clear that they wished to enhance their living conditions but it would be difficult for them to undergo a drastic shift in the lifestyle. Though the village had evolved over the years there were many societal restrictions that were still prevalent. Hence, the spatial planning was kept closest to their existing one but with increased functionality. Owing to the hot and dry climatic conditions, an additional courtyard was provided which would enhance cross ventilation through the house. As a result of Stack effect, the warmer air accumulated would rise up and exit through the smaller courtyard. The living spaces overlooked the courtyard while the corridor was replaced by a staircase with a jaali screen surrounding it that restricted views into the house from the outside. The ventilated screen provided privacy from the road while at the same time facilitated airflow within the house. The windows on the exterior wall were planned in a way that there would be no visibility from the road into the house. The second level with a terrace was added.

The house receives natural air and light from all four sides during the major part of the day which results in less usage of electricity. Also, the open space planning resulted in the house looking larger though the plot was of a considerably small size. Similar to their typical house design, the proposed plan was also in layers to give privacy to the inner living spaces from the road. The ventilated jaali screen formed one half of the external facade that obstructed direct views into the house. A secondary screen which was similar in nature was placed within between the semi-public and private spaces. The windows on the facade were worked out in a way that there were no views created from outside the road to the interiors. This gave the womenfolk of the housing freedom from the attire that had to be maintained in front of strangers. The courtyard which is an essential in Minamburi homes, was retained with a “ Guava” tree planted in the center. The tree shades the house while at the same time enhances the internal living spaces. An alternate entrance to the house is given through the courtyard for domestic helpers and women.

8’’x 8’’ Terracotta Jaali
A handmade block of terracotta is very common in the Southern parts of Tamil Nadu. Being a nontoxic and natural material, it was ideal for the ventilated facade screen. Each block was broken down into openings of various sizes to cut the harsh glare from the sun while still creating patterned light inside. The screen facilitated air flow into the house and due to its various opening sizes, also acted as a dust trap. It helped in reducing the overall indoor temperature in the natural ventilated space thus reducing the need for artificial air conditioning. The Village home is an embodiment of various beliefs such as sustainability, culture and the use of local materials and craftsmanship that helped create a product that could be accepted by the town.