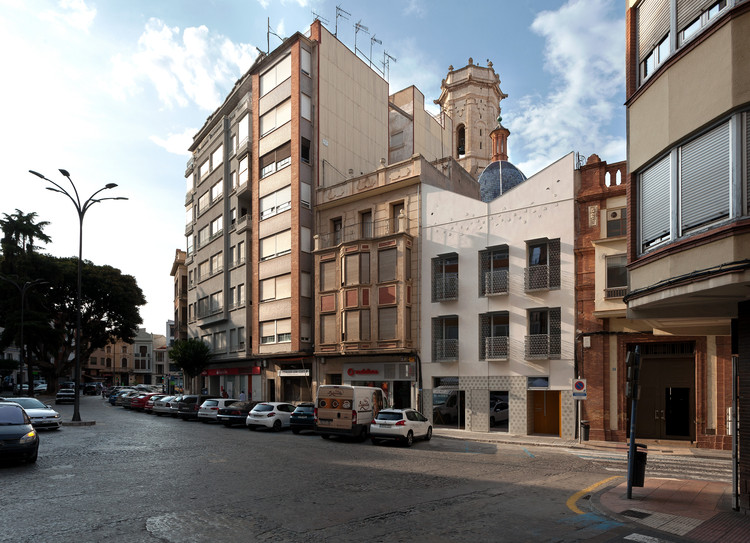 Text description provided by the architects. The bell tower “El templat” (S. XIV, rebuilt in the 40’s), the buttresses on the church of El Salvador (S. XIII, national artistic-historical monument) and the Capilla de la Comunión neoclassical dome (S. XVIII), constitute the key elements in the Historical Centre of Burriana, that was declared Cultural Interest Site in 2007. The main purpose of the building is to highlight this surroundings and emphasise its importance.

The proposal is to create a compact and deep building, with North-South orientation and crossed air ventilation, that has been organized like this: living rooms to South (to the plaza El Pla, having an unorthodox architecture and social representation) and bedrooms to North (to the garden) in the traditional way, which is so effective in terms of thermic issues. This generates a nice connection with the contiguous monuments.

The way the facade is composed is so conditioned by some regulations (Urban General Plan of Burriana, Special Plan to protect the Historical Centre of Burriana, and having the influence of the church of El Salvador, which is Cultural Interest Site), that contrast with the domestic path to the garden, almost in the same way a part of the Capilla de la Comunión invades it, standing in the horizon like a little tower.

Beside that, some brick walls, with no architectural interest, reflect the Southern sun with some grace. One of the flats is on first floor, while the other one is located on second and third, taking advantage of the sloping roof right in the living room. Both of them are really linked with the environment through some terraces and permeable facades.

The ornamental motif in the facade, which is also inside the building, comes from the memory of this place, reminding the pelican exhibited in don Emilio old library. There is many people in Burriana that remember that name already. That was the main argument to be negociated with the institutions in order to be able to build a more opened facade than it looked in the first place due to the strong regulations. The finishing of the roof is a small gesture that tries to intensify the image of the bell tower and the Capilla de la Comunión, mitigating the vision of the dividing walls and involving the sky in the project. 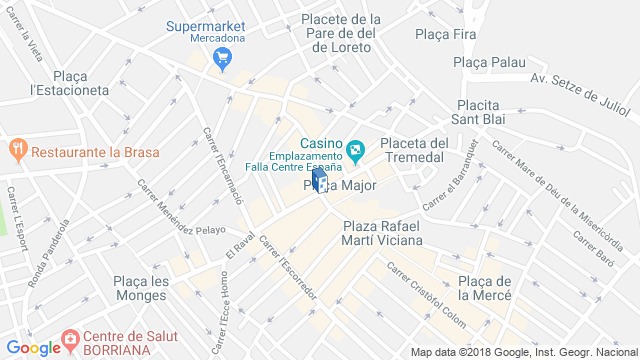