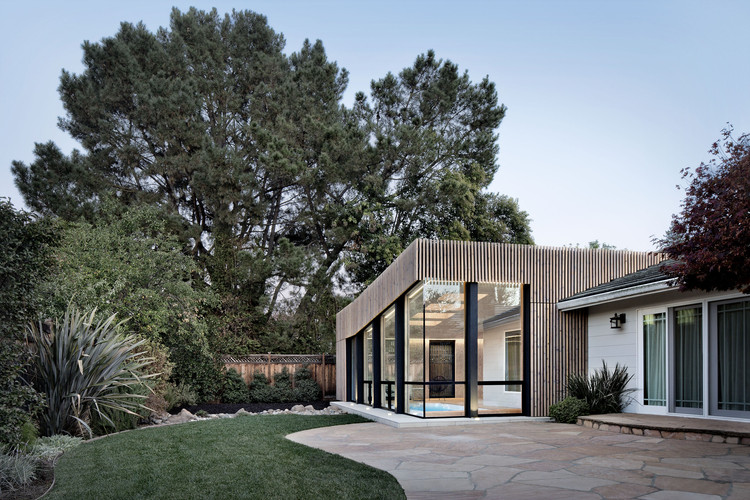 Text description provided by the architects. Originally built in 1966, this Los Altos home is a single-level ranch style structure, ubiquitous in suburban neighborhoods throughout the United States. Inspired by hotel spas frequented while working overseas, the client tasked Framestudio to design an extension to the house that would accommodate a swim spa and home gym. The challenge was that the scope of work was restricted to the addition only. Nothing else was to be touched.

Inspired by international historic preservation standards, Framestudio approached the existing home as if it were of subject to strict guidelines and unable to be significantly modified. The team established a visual language for the extension that contrasted with the existing home, creating a clear division between old and new. Inspired by modernist extensions to centuries old historic buildings in Europe, the Framestudio team created a dramatic angular glass volume, which we clad in weathered cedar, playing off the imagery of  yard  fences  commonly found in suburban North America.

The vertical cedar rainscreen, contrasting against the horizontality of the ranch house, serves as both cladding and privacy screen for the openings that face the neighboring home. The northern facing windows fill the space with natural light, eliminating the need for artificial lighting during the day. The operable skylights and exterior pocket doors allow the space to be ventilated naturally on warm days. The exterior lap siding of the home was preserved inside the new space, and paired with new marine-grade plywood cladding, adding a rich textural visual experience. Linear LED lighting was recessed along the perimeter to wash the walls with illumination and highlight the plywood grain.