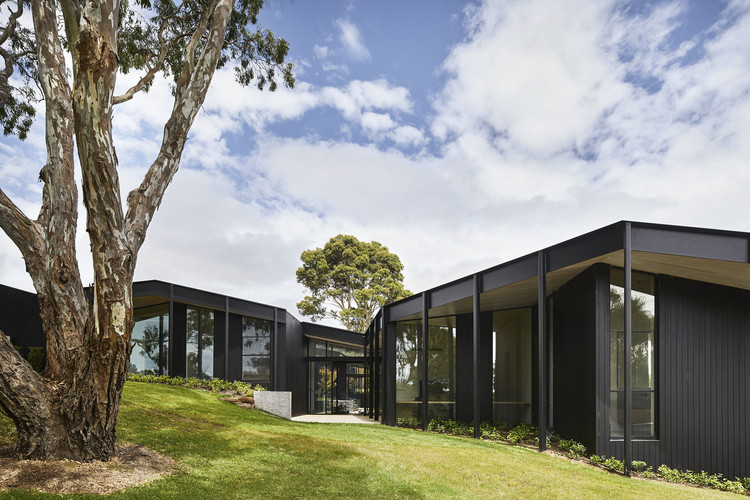 Text description provided by the architects. The brief was the creation of a home celebrating the surrounding architectural vernacular but with a modern, contemporary interpretation. A structure with rural character but with an appropriateness to function imbedded deep in its design. A close connection between the house, pool, courtyard and the rural landscape is ever prevalent as horses and cattle wander unexpectedly into close view peering inquisitively through framed floor to ceiling windows at the family activity inside.

The response to brief proposed a discreet yet volumetric built mass of elongated and staggered structures informed by the natural typography of the land and informing the internal plan and section.

The low long typology of farm buildings and barns is prevalent throughout the Mornington Peninsula wine region. Utilitarian in nature this same vernacular was a key component of the brief. However in a departure from these rudimentary structures, a dynamism and energy reveals itself in the roof line. Appearing to fold and crease, bend and pleat it celebrates the surrounding landscape of ridges and crests, ranges and rugged elevations. At first hidden from view, the roof line unfolds on approach, revealing itself fully on arrival in a playful origami of angles and immediately announcing the modernist approach taken.

A colonnade of columns provide symmetrical support to the deep eaves, wrapping the residence in a sense of order to juxtapose the playfulness of the angled roof line. Deep eaves provide protection from the western sun and create a dramatic display of shards and angles, shadow and light throughout the day.

From a distance and on approach, the three wooden volumes appear as a solid form however as the driveway winds along a tree lined ridge the more refined detailing reveals itself.

Three elongated blackened timber pavilions form a U shape identifying strongly with the site narrative and staggered typography and alluding to notions of a working yard or arena. Corridors encompass the external courtyard, punctuated at ends by large openings allowing for maximum cross ventilation to all axis whilst providing a direct connection to the surrounding landscape and sense of the natural topography.

The three low slung blackened timber structures delineate the functions of this family home and act as a border to the central courtyard. Providing retreat and a sense of calm this space is protected from the elements but permits a connectedness to the surrounding landscape via spectacular views through the house and down the valley.

Purposefully intimate and enclosed to juxtapose the expansive nature of the site, it appears sunken and private – almost hiding - from the frenetic nature and activity of the farm life. Along the southern edge a raw, agricultural retaining wall catches the small undulation in the topography and provides the demarcation between work and home, the threshold between chaos and calm.

Materiality celebrates the barn narrative but with a refinement and distillation. Rough sawn black timber shrouds the external façade. Natural and sustainable, this blackened materiality immediately references the rural character and forms the basis of the key construction material.