Meis Architects have released new renderings of the FC Cincinnati soccer stadium in Ohio. After FC Cincinnati won their bid to become a Major League Soccer (MLS) team, the design was made to seat 26,500 people at a cost of $200 million. The stadium will be built with a retractable roof canopy and ETFE pillows that can be lit with the soccer club’s blue and orange colors. 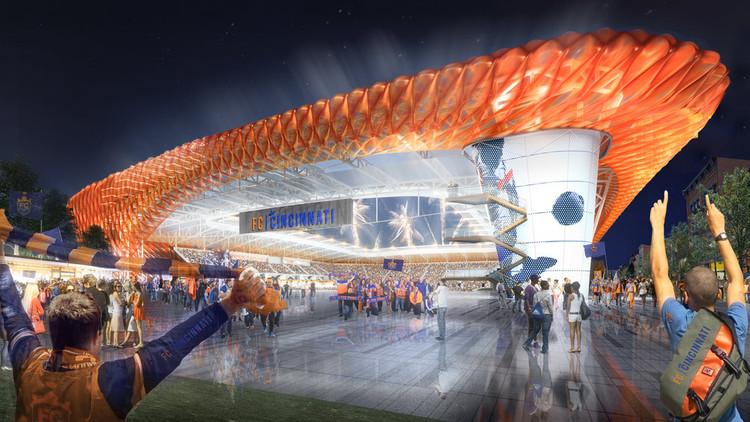 FC Cincinnati's bid to become a MLS team was successful earlier this year, and they will leave the United Soccer League to begin play as a MLS team next spring. Meis Architects has said that, "additional modifications and adjustments are expected to be made over the next few months before formal construction begins in 2019." The club's u-shaped stadium aspires to be a premier soccer venue in the West End neighborhood of Cincinnati, across the street from the Over-the-Rhine neighborhood.

“We believe our West End stadium will be a catalyst for the neighborhood, but also help position Cincinnati as a ‘City on the Rise’ on both a national and international scale,” said Jeff Berding, FCC president and general manager. As Meis states, The Bailey - the home club's designated supporter's section - is located at the north end of the stadium and will have a capacity of over 3,000 seats in a single steep tier behind the home goal. The steep seating bowl design was made to ensure a more dynamic soccer viewing experience.

The club hopes to move into the new stadium in 2021.