Save
A Month After the Fire, The National Museum Receives Emergency Repair and Demands a Budget of $27 Million
Share
Or
Copy

Several institutions have taken a stand and initiatives have been made in this direction. The emergency works began on September 21 to contain, clean, and protect the remaining structure, which is, without a doubt, the most pressing initiative.

The Department of Education (MEC) allocated $2.4 million (R$ 8.9 million) to the Federal University of Rio de Janeiro (UFRJ) to complete the first phase of the rebuilding process. Concrejato Engenharia (National Maintenance/Engineers) have been working on site since then, and say it will take six months to complete in compliance with legislation.

“It’s a judicious work and we are acting alongside the archeologists from UFRJ and the Federal Police (PF). All materials go through an inspection by the archeologists to confirm what is and is not possible to recover before they are removed from the site. Ruins, roof tiles, exhibition elements, and other materials go through analysis to determine their importance and historical value,” says Maria Aparecida Soukef Nasser, Operations Director for Concrejato Engenharia, in an exclusive interview for HAUS. The company is also responsible for the rebuilding and restoration of the Museum of Portuguese Language (MLP) in Sao Paulo, which was destroyed by a fire in 2015.

Besides clearing the site, the first phase also includes protecting and anchoring the remaining structures and building a temporary independent roof made of metal.

"The first stage is fundamental for future technical studies on site that will allow for the reconstruction of the museum. The criteria provided will later be adopted for the project," says Nasser.

Listed by the National Institute of Historic and Artistic Heritage (IPHAN) since 1938, Paço de São Cristóvão was built in the beginning of the 19th century by Elie Antun Lubbus (or Elias Antônio Lopes, his “Portuguese” name) and became the official residence of D. João on January 1, 1809.

Built in the eclectic style, the structure had a built area of 13,600 square meters distributed through 122 rooms and three floors. Luís André Moreira Alves, technical coordinator of Rio’s Civil Defense, told HAUS that about 80% of its structure was destroyed by the fire.

Soon after the tragedy, the museum’s vice director Cristiana Serejo estimated that the budget would be around $3.7 million (R$ 15 million). However, management is currently working to include in the 2019 Union budget which predicts that it will be around $13.4 million to $27 million (R$ 50 to R$ 100 million) to begin the reconstruction.

In a press conference on October 2, the museum’s director Alexander Kellner said that the resources are the first step to reopen the museum in three years time. In an interview for “O Globo,” Kellner added that the façade and the external grounds will be kept, but that the interior will be redesigned using sustainable and energy efficient materials with low carbon emissions.

The budget, however, only considers the building itself, as the lost artifacts can never be recovered or replaced.

With this being said, the Portuguese government announced that they will take inventory of its own collection to see what can, in the future, be transferred to the National Museum. The declaration was made by Luís Filipe Castro Mendes, the Cultural Minister of Portugal, during a meeting with Brazilian Education Minister Rossieli Soares on September 14, as stated by the Department of Education (MEC).

According to the Department of Education, the General Director of Portuguese Cultural Heritage, Paula Araújo da Silva commented that she had been keeping in touch with IPHAN to align actions between the two countries.

When asked by our reporters, IPHAN confirmed that since 2017, “it has made a cooperation agreement with the Portuguese Directorate General for Cultural Heritage with the intent of promoting interchange and to develop projects that promote the common cultural heritage between the countries.” The text highlights, however, that up to this moment the institution has not been contacted to discuss the National Museum’s rebuilding.

By Gazeta do Povo. 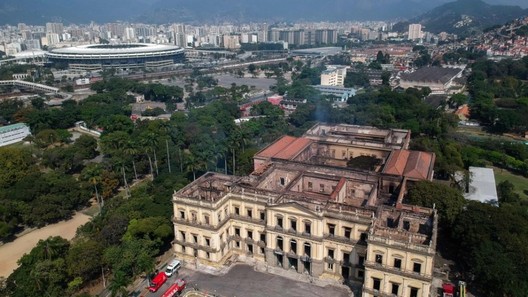