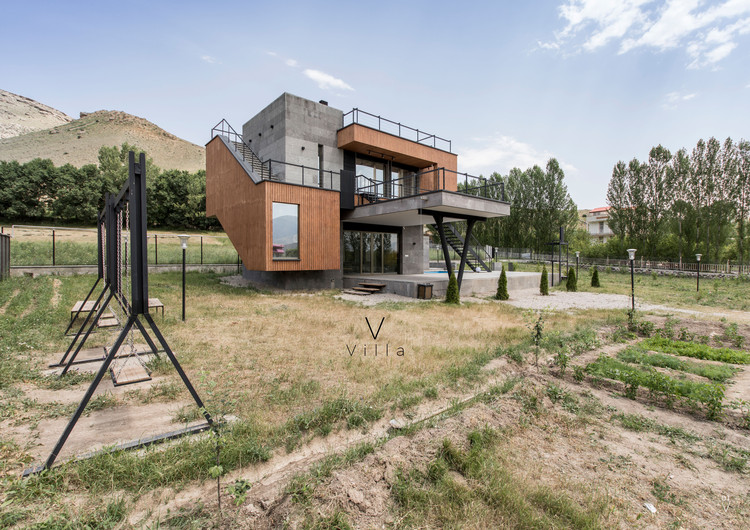 Text description provided by the architects. V villa is located in country area of Maku on the mountain slopes with spectacular views over natural sceneries around. This project was built to provide a cosy retreat for a rest far from city uproar.

The first challenge of designing this project was the relationship between inner and outer spaces and the dialogue between open and closed ones. The in-out conflict is defined in a way that architecture owns a particle of the world and closures it, so two phenomena are created: inner and outer space. The project is considered as a seek to abolish human-nature limits and to create in-out coherence, and as an attempt to enrich spatial requirements as well as creating dynamics in form.

The building is located in a district with virgin nature and domination of nature is obvious at the first glance. The volumes are independent as well as combined and the simplicity of forms improves humility about mysterious nature. Stretched terrace, held by V columns is completed by linear railing to maximize transparency and to dominate over green plains around.

Another challenge was the 45-square-meter gross area; Ground floor connected to the earth by a platform is dedicated to living room and kitchen and the first floor includes 2 bedrooms and a bathroom. The two levels are connected by a stairway which is cantilevered to solve the gross area challenge and to meet spatial requirements as well as playing a fundamental role in shaping the form of the building. The upper stairway leads to the roof which is functioning as an observation space over natural sceneries. A pool is added to the eastern part of the platform to improve natural ventilation in the living room.

Another focal point is the choice of the finishing materials for the facade. These are intended to give light and identity to the building; Basalt stone-used in masonry historical buildings of this district- is utilized as a vernacular material in composition with wood. Large picture windows are added to permit fluidity and transparency to the environment. 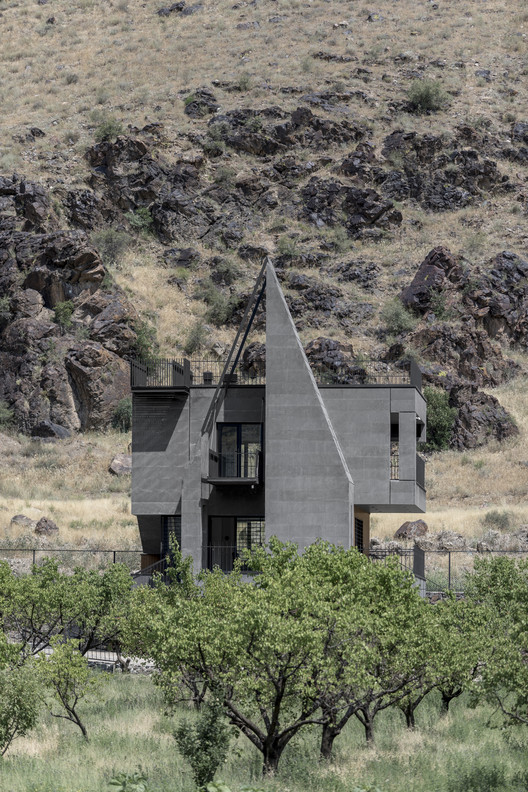