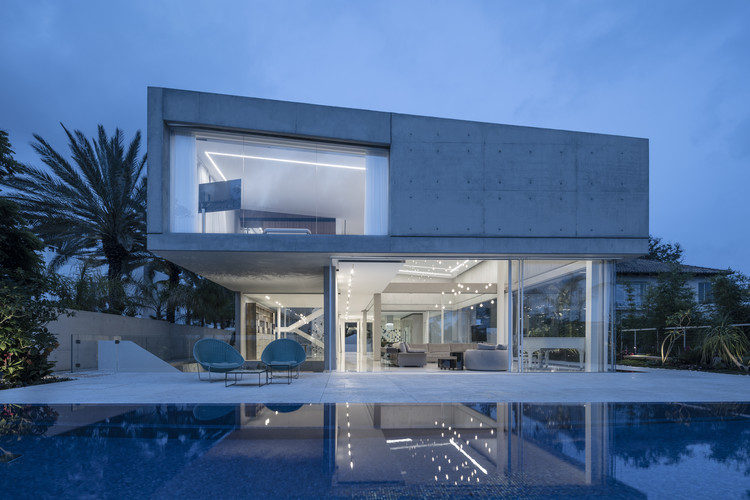 Text description provided by the architects. A private family home located in an urban environment.  The façade of the house is in fact a kind of sealed “box” composed of two large volumes. One horizontal façade is made up of a white aluminum skin with a repetitive graphic pattern in which, here and there, in a seemingly random way, cut-out openings allow a glimpse into the house during the day and the filtering out of artificial light at night. The upper volume is constructed of exposed architectural concrete to create a tension against the lower volume. Designed to create a sense of flight, the upper volume is positioned on a diagonal and emphasizes the contrast between it and the perforated white aluminum façade. The envelope facing the street forms a minimalistic and polished object that accentuates the monastic and condensed language chosen by the designer. The street-facing façade stands out because of its restraint, successfully fulfilling its purpose of creating a precise and sleek appearance.

The perforation in the white aluminum envelope allows light and shadow to play through, creating in an otherwise calm space a lyrical and harmonious poetry that seemingly dances across the walls of the building and breathes life into the silent walls. The pattern of semi-triangles, and their seemingly random spacing, appear to epitomize the rhythm of the movement of light. The designer made further use of this pattern, seen sometimes at two-dimensional angles almost like a graphic logo, on the unique stone wall in the entrance which serves as a divider between the entrance hall and the kitchen. This massive wall, in its entirety, is crafted in an artistic mix of iron and natural stone and carries the design theme through from the exterior into the house.

The other facades are built of huge fenestrations that allow the whole garden to penetrate into the house’s spaces. The transparency of the ground floor strengthens the tension between it and the sloped mass of concrete on the second floor. A large patio at the center of the house forms an interesting meeting point between the internal spaces and the exterior, providing an interlude between being inside the house and the courtyard.

The formal polishing, the precision in the detail and in the meeting of materials, the meticulously yet cautiously phrased monastic language all give us, for a moment, a sense that we are looking at a flat and nearly two-dimensional picturesque stage. The diverse and continuing planes of the white tones and the combination of the geometrical performance of the light against the horizontal and vertical surfaces, give the tranquil picture a sense of space and depth.

Against this background, a richer and more varied language was employed in selecting the furnishings. This is particularly evident in a central piece in the dining space for which a decorative bookcase of brass and onyx stone was envisaged by the firm’s Object brand, according to architect Irene Goldberg’s design. The surrounding garden also makes use of a wider palette of color to create interest and a contrast between architecture and nature.