In recent years, architecture film festivals have erupted around the globe providing critics, theorists, and all architectural thinkers with an additional median for architectural expression and discussion. The symbiotic relationship between architecture and film stems from architecture’s effect on its built environment and its determined social/cultural impact.

As the international audience grows and new genres emerge, architecture film festivals have come to encompass more than just the film’s initial viewing; programs, lectures, and discussions are organized, enhancing the intellectual impact of the viewing material. Architecture Film Festival Rotterdam (AFFR) is celebrating its tenth edition this October by exploring the concept of “building happiness” in an age when we seek to build a more sustainable world - a challenge for both historic and contemporary design.

Below, we have rounded up highlights from the AFFR, with themes including Jean Nouvel, post-industrial landscapes, and major gallery renovation.

From the creator: “Mole Man tells the touching story of Ron Heist, a 66-year-old man with Autism, who has been working on an elaborate building in his parents’ backyard since 1965. Built without cement or nails, the building has fifty rooms by now. The structure can bear its own weight due to the careful way it has been stacked. Although his continual building process keeps him happy and satisfied, his family and friends are beginning to worry about Ron. Where will he end up when his 90-year-old mother passes away?”

2. Do More with Less

From the creator: “A film that touches the foundations of architecture: how to be inspired by the limited resources and limited use of materials to create interesting architectural feats. Many young architects in Latin America are forced by necessity to work in such circumstances but see it less as a limitation than a challenge. Do More With Less offers a view of optimistic and inspiring architecture Inspiration to get straight to work!”

From the creator: “He was one of the architects that shaped the optimistic, modernist style in Palm Springs in the 1950s and ’60. Born in Switzerland, Albert Frey worked on the Villa Savoye with Le Corbusier, but his passion for new materials and daring structures did not come to full fruition until he came to America. His streamlined aesthetic appealed to lots of Hollywood stars who wanted to build a house in Palm Springs. The film is the first half of a two-part portrait of Albert Frey. The second half is expected in the spring of 2019.”

From the creator: “Pritzker Prize-winning architect Jean Nouvel is at the height of an already legendary career. At age 70, he circles the globe, tending to such monumental projects as The Louvre Abu Dhabi, The National Museum of Qatar and The National Museum of China. Among the most innovative, thought-provoking and rebellious architects of his generation, Nouvel reflects on his work, as well as his design philosophy.”

From the creator: He worked with Maxwell Fry and Eero Saarinen, he won the Pritzker Prize, and his immense oeuvre reflects that past 70 years of American history. Sculptural, iconic, with a powerful flair for drama, and always – in line with his Irish roots – in close communication with nature. This feature documentary film about 96-year-old Kevin Roche offers an intriguing overview of an exceptional architect’s oeuvre, focusing on the versatile nature of an era when America was still optimistic.

From the creator: “The coal mine in the Romanian town of Petrila is more than a mine. To the city’s inhabitants, it is their life, their source of income, and the pivotal point of the community. But the mine is closing down, and European regulations dictate total demolition. Former mineworker and artist Ion Barbu decides to make every effort to prevent the mine’s destruction. He uses his art to keep the spirit of the mine alive, resulting in absurd imagery. ‘Europe is just a continent. Petrila is a world.’”

7.Portrait of a Gallery 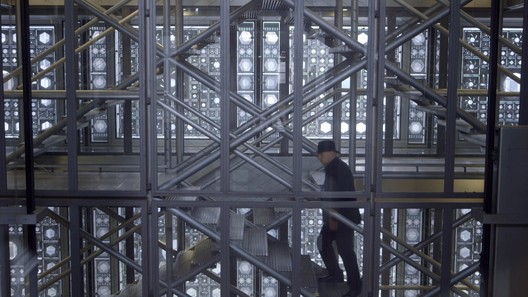