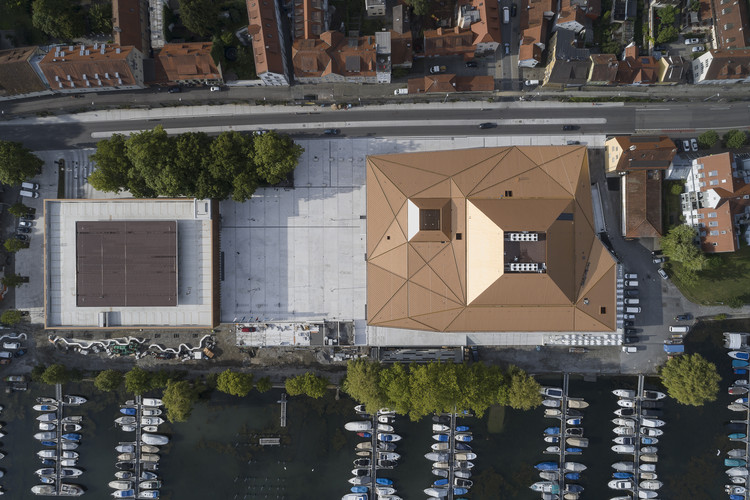 Text description provided by the architects. The renowned Nobel Laureate Meetings are the most distinguished among the various conferences that enjoy the flair of the island town of Lindau. Over the years, however, the conference venue was no longer meeting modern demands. Thus, an architectural competition for the reconstruction and extension of the conference center was launched.

The competition offered the unique chance to redesign the layout of the conference hall, built in 1981, relocating the entrance from the narrow and unattractive situation on Zwanzigerstrasse to the east side of the hall, opening onto a spacious new plaza extending from the street to the lake promenade. In addition to the multilevel parking garage (completed in 2017), which was to be erected across the plaza from the Inselhalle, the competition also required an integrated fire station, office space and shower facilities for the harbor master and boat owners.

The newly created plaza provides as an imposing entrance to the new Inselhalle and, at the same time, marks the most northerly point of a sequence of plazas leading southward through the medieval town center of Lindau to its historical harbor.

The competition task called for preserving the extant core of the Inselhalle, while equipping it with new uses. Our architectural concept envisaged leaving the hall clearly discernable from the outside by maintaining the striking roof form but also adding a “little brother” which, viewed from above, would accentuate the new foyer. All surrounding building parts were tied into these two raised points by folded polygonal roof facets, producing an overall sculptural gestalt that presents the new Inselhalle as an architectural entity within the urban landscape. Clearly defined incisions and inward folds in the façade emphasize the building’s primary orientations – toward the front plaza, lake promenade, and town gate – and accentuate the approaches, in particular the new main entrance, which is accessed from the plaza.

An aluminum metal shell underscores the structure’s sculptural quality and stresses the correlation between the two “building blocks” – the Inselhalle and the parking garage.

The coated aluminum panels or sheets were used to clad the façades of both buildings and cover the roof of the Inselhalle. The copper color of the outer shell lends the new building a warm and elegant appearance and, at the same time, ties it into the ensemble of Lindau’s historical center with its red tiled roof landscape. Using corrugated aluminum panels to cover the façade with a pattern of irregular, vertical lines, gives the surfaces a homogeneous and, but at the same time, dynamic appearance.

Integrated glazed surfaces are arranged flush with the building volume. In contrast to the sculptural structure of the Inselhalle building, the outer ramps and stairways as well as the lake terrace plinths are rendered in exposed concrete. 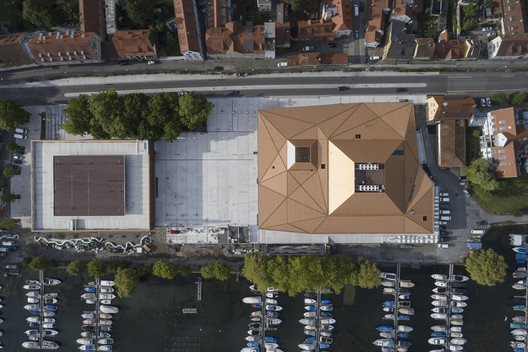