Text description provided by the architects. The house is set in a beautiful site surrounded by a pine forest near the Lebanese mountain village of Bois de Boulogne and comes with a wide range of complications. Firstly, it already had the remains of a house on it. Though of limited architectural interest, the house had been one of the first modern homes built in the resort in the 1930’s and originally belonged to the current owner’s grandfather. Fought over at the outset of Lebanon’s wars – the town straddled an important frontline – it had developed a bloody reputation. Damaged by gunfire and shelling, it had been occupied by the assorted military and militia forces and was used for 28 years as a torture and detention center.  We were facing a house with its splendor past buried in memory.

It all started with deciding how to go about this ‘difficult exorcism’: whether to work with what remained, as the owner wished to preserve some connection to his grandfather’s house despite its painful associations or to start from scratch and wipe away both the connection and the unfortunate history. In the end, the decision was taken to do both. The ruins were gutted then reinforced and reused as a historic shell into which a brand-new home could be inserted, the architectural emulation of the hermit crab, which makes its home in the abandoned shells of other mollusks.

Cleaning up the house and its surrounding garden took 4 months of intense work. This ruin’s new ‘resident’ is a series of spartan perforated Corten steel-clad boxes. Stacked on one another, they nestle in the embrace of the two remaining sections of the house but also project beyond it, both at the roofline where their aesthetically rusting outline is just visible above the parapets and at the south-eastern end of the house, where they project dramatically above a low-slung, 35-meter Corten steel-clad concrete and glass oblong with a planted roof.  The Corten steel skin changes color with time and is punctured with tiny dots echoing patterns of trees, a sort of “tree trunk ghost” projected on the façade.

The renovation added more than 2,000 square meters to the original 1,500 square meters stone house, along with an annex and guard house. Sustainable design was at the core of the renovation. In fact, the house uses solar energy for winter heating while harvesting rainwater and walls are backed with a double insulation layer. Among passive cooling strategies, the villa’s shading is designed to take advantage of natural light. Partially sunk into the ground the volume houses a pool and an art gallery. Stretching through a grove of replanted pine trees, it is inserted in the sloping ground towards the snow-clad mountains in the distance.

Sunk into the landscape through terracing, the house is designed to blend into its surroundings. Climbing plants and vines colonize the ruins to camouflage the past, cleansing the house of its troubled history.  More than a 1000 pine trees were planted in the garden: umbrella pines, oak trees, cork trees, Lebanese cedars, and other indigenous trees upholster the landscape which also includes a rose garden. The revival of walls, plants, and life inside finally took place in the house after long decades of gloomy events.

The case of this house is as dreadful as it is beautiful. The story behind it and the testimonials backing it makes it stand as a powerful message. The House with two lives restores faith in man’s will to fight and is with no doubt an example of an architectural work of high precision. 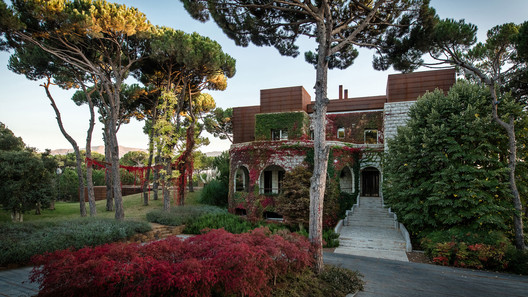