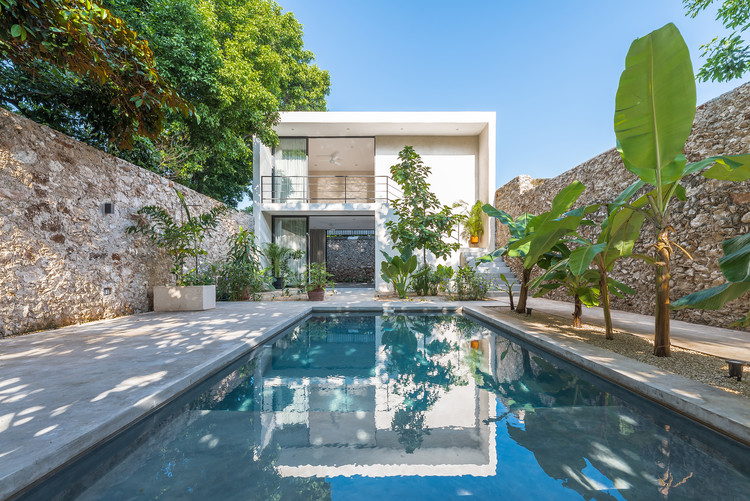 Text description provided by the architects. Although, as a starting point, the house has certain architectural elements of obvious interest, the combination of different styles within the design of the house results in a lack of cohesiveness making it hard to understand. Hence, the rearrangement of both the existing spaces and the overall style of the house have been the cornerstones of the entire intervention. Arches and colonial doors remain in the final project, as well as the coexistence with the natural light through numerous skylights that timidly intuited in the original project of the late 50s.

This rearrangement resulted in the appearance of a completely new façade but more in line with the existing door steps and arches, as well as the original heights, spaces and volumes of distinctly colonial reminiscences. The carpentry, also typical of this architectural style, was entirely recovered and rearranged into the new façade. The dividing line between housing and street is blurred by the elimination of the original gate, opening the private property to public space and vice versa. In the façade, a tree replaces 45 m2 of the original roofing.

The floors were changed, walls were relocated, divisions were raised to enable new spaces and a great opening was made to incorporate the house into a garden to which the original project always turned its back. The poor state of preservation of the roofs required demolition and subsequent reconstruction. All the wall plaster was redone incorporating the detail of "exposed socle", stripping the construction stone from the walls to facilitate the release of moisture present in the buildings of the region. The result is a fundamental element for the good conservation of the finishes in addition to a remarkable aesthetic detail that characterizes the whole house.

At the back of the property, two bedrooms both with bathroom and dressing room are built, separated from the original construction by the garden and swimming pool area. By untying both constructions, we managed to create a marked division between common or public areas and private rooms. These bedrooms present several details of natural lighting in line with the projections developed in the original construction. The transit through the garden to connect spaces and uses, render a holiday home atmosphere strongly linked to the external experience that was pursued from the beginning of the project development. The particular characteristics of the Yucatan climate make the sun, rain and vegetation fundamental elements in the overall understanding of the project.