Save
In Progress: 290 Mulberry / SHoP Architects
Share
Or
Copy

290 Mulberry is defined by its context through a direct response to zoning and building code regulations. Located in Nolita, New York, this building is bound on the north by Houston Street and on the west by the historic Puck Building on Mulberry Street.  A zoning district requirement specifying a masonry enclosure for the two street walls created an opportunity to respond directly to the Puck Building, one of New York’s most recognizable masonry buildings.  We then focused the idea on the reinterpretation of local laws and regulations with a contemporary response to masonry construction and detailing that doesn’t attempt to imitate the past. 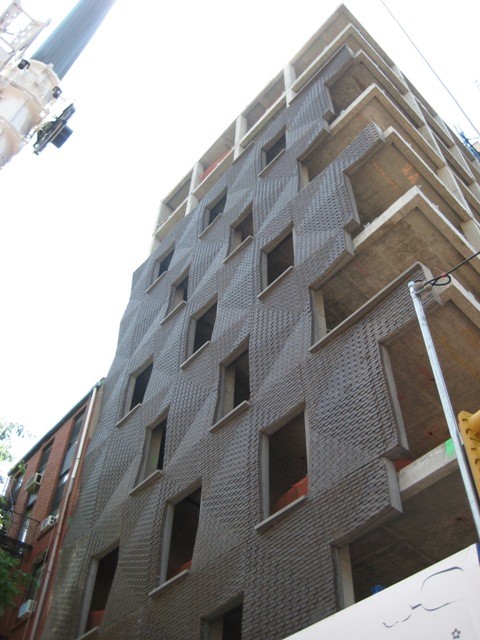 Making a literal interpretation of code written for classical ornamentation allowed us to project our enclosure over the property line at 10% intervals for every 100 square feet. Maximizing the amount of projected area, while minimizing the overall depth of the enclosure became key criteria for our design. When coupled with material properties and fabrication constraints, these criteria began to define an approach that was a contemporary reinterpretation of brick detailing. By customizing a standard precast brick panel system, we were able to achieve maximum effect at minimum cost. The building then becomes veiled by an textured wrapper around the street walls in contrast with the simplicity of the inner core.

The building is 13 stories high, including a mechanical penthouse.  Commercial space is located at the ground floor and cellar.  There are a total of 9 residences in the building, with the typical floor plate reaching 2000 square feet of usable space.  The small size of the floor plate and the value of real estate in the area made optimizing the depth of the exterior enclosure critical in reaching a balance between value added and sellable space.

We are gearing up to fully enclose the building in the next couple of months as we strive for full completion in early 2009.