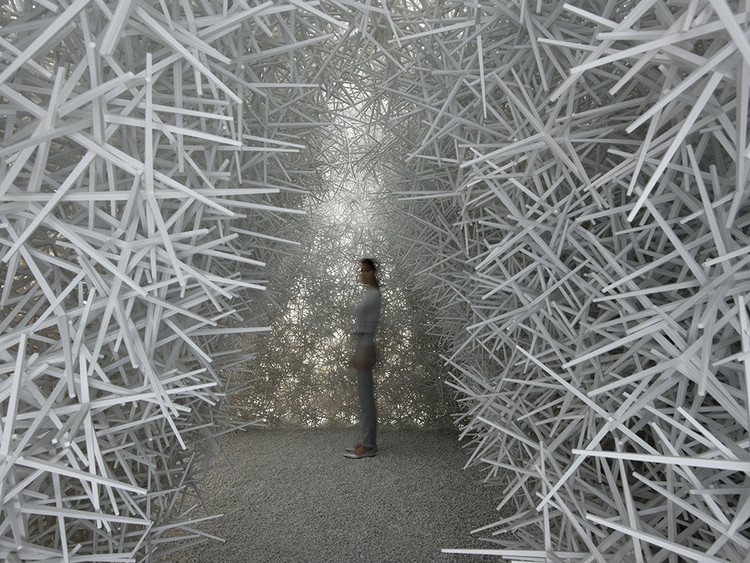 Text description provided by the architects. In inanimate nature, large masses of granular substances, such as sand or gravel, are in constant processes of formation through perpetual cycles of erosion and accretion. What if architecture was to emulate this behaviour and allow for its own continuous reconfiguration?

The ICD Aggregate Pavilion 2018 presents the latest results of 10 years of research into designed granular materials for architecture. It constitutes the first fully enclosed architectural space entirely constructed from designed granules, which lie only in loose frictional contact. Such unbound granular materials show the unique property to obtain both the stable character of a solid material and the rapid reconfigurability of a fluid. If custom-designed particles are deployed, granular materials can form self-supporting spatial enclosures while remaining fully reconfigurable and reusable. 70.000 star-like, white particles are made from recycled plastics. They are poured by a rapidly deployable, large scale robot system. The pavilion demonstrates how designed granular materials open up a new perspective for a design paradigm of productive forms of de- and re-stabilization and, thus, an architecture that can be rapidly deployed and reconfigured, as well as eventually removed and reused.

CONSTRUCTION PROCESS
Full-scale structures made from designed granular materials need to be constructed jn situ. In this case the industrial storage space of the granular materials has been converted into a production hall. A cable-driven parallel robot, custom-made to be flexibly installed, was fixed on four points to the walls of the hall and its supporting beam structure. The total working space measures approximately 9 by 10 metres.

The storage boxes of the granular material are used as an effector on the cable-driven parallel robot, which drives them to a precisely defined deposition point and unloads them. Consequently, the empty boxes are deposited as a boundary container on the edges of the structure. In this manner also the storage-, production- and container-system are never redundant but fully reusable.

The cable-driven parallel robot was controlled through a custom-written interface using a parametric modelling environment. The design and construction process involved an image-segregation algorithm, which allows to check the geometric accuracy of the structure using image segregation. The design of two interconnected vaults explores the potential of spatial enclosures, formed entirely of designed granular materials at an architectural scale. 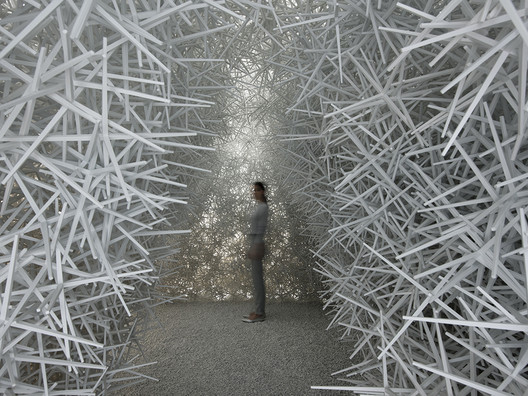