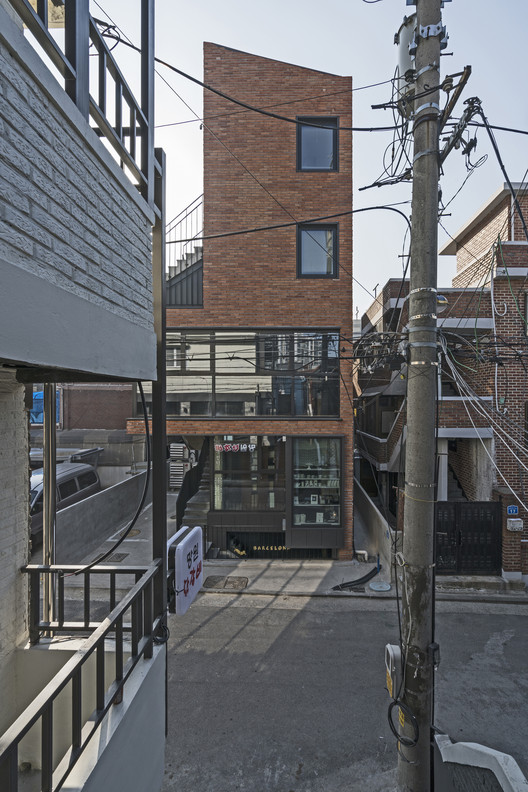 Flowing View
The site is located in Mangwon-dong in Seoul, South Korea. On a limited site with an area of only 70m2 and the intent to lease the building by each floor, the exterior stairs became the project’s most important (and perhaps inevitable) element. As the stairs follow the building upwards it folds and disappears out of view, controlling the view from the stairs as well as from the inside. Typically, small spaces are combined and simplified to be used as big as possible. In this project, we propose a careful alignment of spaces with the “vertical corridor” and views that flow outside to minimize the effect of its tight spatial conditions.

Site
The district of Mangwon-dong is primarily made up of small villas and residences on plots less than 100m2, and is currently undergoing a makeover by remodeling them into small shops and restaurants. Although the given site’s area was limited, it had an advantage that the adjacent site to the north will be kept clear (as it is used as a designated parking lot for another building).

Program
The future tenants of the building were set during the design of the building. With a wine bar in the basement, a gift shop on first, a late-night café on second, and offices on third and fourth floors, they actively participated in the design process to suit their needs. Although each floor was given less than 30m2 of actual floor space, this process allowed for spatial efficiency and high tenant satisfaction.

Mangwon-scape (Telescope)
Through a rigorous design process, we developed the exterior circulation so that each floor was given their desired approach and exposure to the outside. The first floor was raised a half level up so that the basement gathered sufficient daylight, and the stairs folded and turned to squeeze inside regulation, almost acrobatically. As a result, each floor was given its unique character and expression.

Facade
The district of Mangwon-dong is typically full of red-brick villas. Both we and the client wanted to maintain this neighborhood’s atmosphere, so we decided to use reclaimed brick tiles. By minimizing the vertical mortar lines, we wanted to create a rough, stacking texture to this building mass. The voids that were cut by the stairs were clad in metal, in contrast. Through a combination of angles and materials, the building becomes dynamic to see as well as experience.