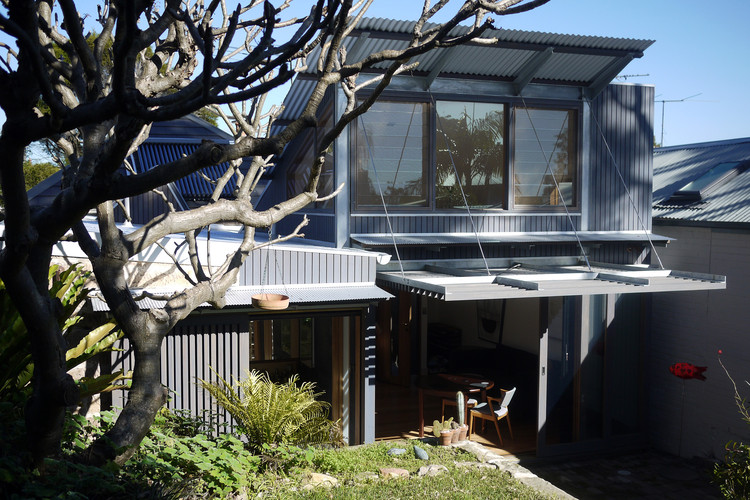 Text description provided by the architects. BRIEF
The site was once a quarry and the existing sandstone cottage 'Markinch' is one of several listed cottage on the street built by the same stone mason in the early 20th Century. Our clients did not think it was possible to renovate the old cottage and came to us wanting what they called a 'Shedio'; a shed for him and a studio for her. One thing led to another once we established that we could, in fact, perform a little surgery on the cottage. There was no ambition to add floor space or rooms, only the ambition to untangle and improve what they had and connect the cottage to the garden, to the sun and to the sky.

KEY CHALLENGES
The house was on the state heritage register so we needed to work hard to convince Council that a contemporary addition was appropriate. The other challenges were connecting the house to the garden, untangling the floor plan and working within tight budget constraints.

SOLUTIONS
Design strategies were derived from a pragmatic mapping of site conditions, potential inside/outside relationships, adjacent building alignments and heritage restraints, coupled with our desire to add a bold and ecologically responsive layer.

Insensitive additions were removed, the bricks re-purposed to create a series of deep steps that mediate between the levels, elongate the courtyard and make stronger the connection between house and garden. Internal spaces were opened up and re-organised, realigning living spaces to the morning sun and the garden. Two new pavilions, one attached for living - the other a detached studio talk to one another but at the same time offer a poetic counterpoint.

The bathroom was imagined as a bathhouse or Japanese onsen. Hardwood sliding screens frame a private portion of the garden, blurring the threshold between inside and out. The black slate tiles and carefully detailed threshold reinforce this idea of the bathhouse / garden refuge.

THE 'SHEDIO'
A small shed/studio sits at the back of the site. The south-west facing wall looking back to the house is clad in a triple-skin polycarbonate sheet that brings in a gentle light ideal for painting. The stud wall has been treated like a piece of joinery and is a dressed, 140mm-deep blackbutt frame that doubles as storage. At night it glows like a lantern and takes the eye to the back of the garden.

HERITAGE
We considered the original cottage as a place of contemporary residence free of any kind of romantic attitude to what was, nor a negative attitude to what is. The general approach was not to attempt retrieval of the original so it’s frozen, but to allow history to continue at a slowed pace and so our interventions are geared to render the original core-bungalow as a setting for private and public contemplation. This is an approach evidenced in projects by European architects Scarpa, Zumthor, Utzon, Fenn and Souto de Moura which seek to explore the fine line between restoration and re-fabrication.

Our approach was to keep what is valuable about the original house without compromise, whilst adding a new layer that responds intelligently to climatic concerns and to the particularities of site; that respects the materiality, character and scale of the original dwelling and the street whilst adding a modest, carefully detailed and articulated contemporary addition that acts in complimentary opposition or counterpoint to its host. In this way, the project hopes to relate in a meaningful not a superficial way. It does not mimic; it interprets and modifies around a set of simple and sound design principles and does so with material and construction integrity.