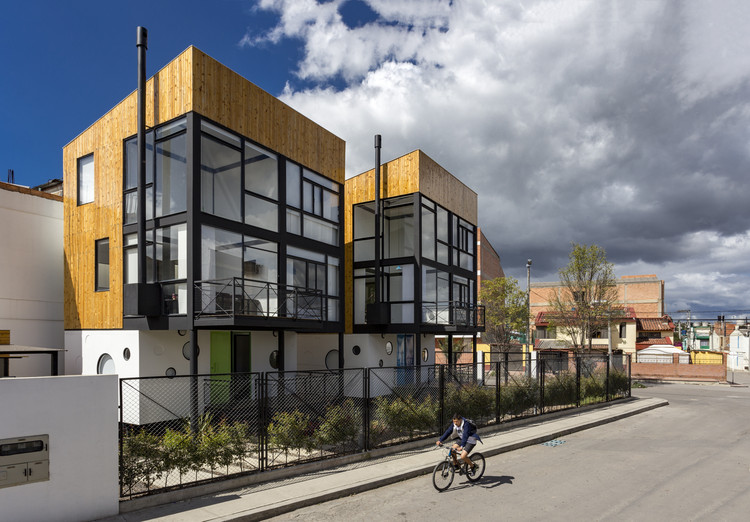 Text description provided by the architects. The project consists of a small group of 2 houses located in the urban area of ​​Paipa, Boyacá Municipality, Colombia. Located in a corner lot of approximately 314.85 m2, and where the built area is 116.45 m2 for each house.

It is conceptualized, a modular refuge that grows vertically, in search of a space that adapts to time and is capable of satisfying both human and environmental needs. Both housing units are designed under the same basic criteria: completely modular monolithic skeleton, context linkage, respectful materials with the environment, lighting, cross ventilation, functionality and sustainable comfort. Both share; garden area parking and barbecue area (food preparation and cooking module).

Spatially each module is composed of three levels. The first level is configured for two accesses; one for a separate room, and the other access for the rest of the house. The second level, is framed by a large window on the facade, which allows the exterior lighting to invade its spaces, is composed successively by; living room, kitchen and dining room, accompanied by the main room. The third level, unburdens verticality with a vacuum to the main space of the house, and is composed of two secondary rooms.

The geometric composition on the facade rests first; in the structure together with a series of frames that configure large windows, representing the transparency and illumination of the internal spaces, and second; the composition of color in rectangles of superboard®, generating mosaics that provide dynamism to the building. The symmetry of the rectangles is broken, adding circular windows and circular inserts in the walls of the façade.

Its structural configuration is based on circular metal columns that rise from the ground by means of concrete dies, the soil does not intervene, thus reducing costs due to excavations.

Its dry construction minimizes waste considerably on site, generating a faster and cleaner process, due to the fact that many of the parts are made in the workshop because it is a modular structure. 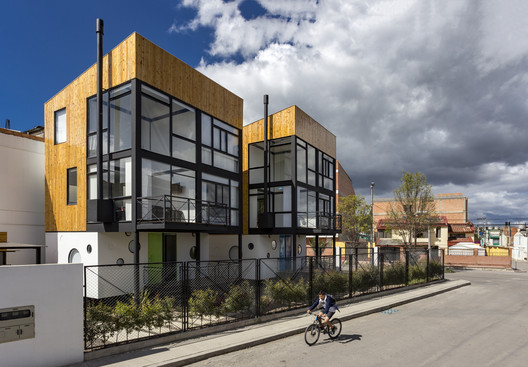