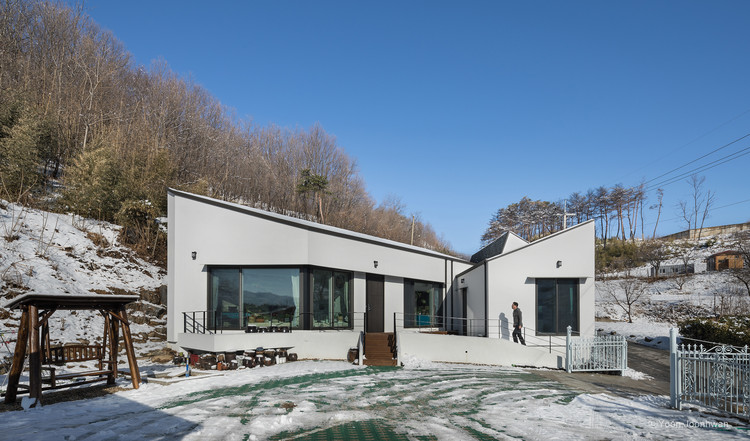 Text description provided by the architects. A mountain village in Gangneung where the ice skating heats of the PyeongChang 2018 Winter Olympics are held, Gwaneum-ri was named after the Korean Buddhist term, Gwaneum-bosal, who embodies the compassion all buddhas and local people believed that she appeared a long time ago. This area is vulnerable to fire due to the dry wind from the mountain to the East Sea under the influence of local climate in Gangneung. The forest fire that occurred in May 2017 spread along with the spring wind from the west to the downtown of Gangneung, damaging many houses and forests. Amongst them, a house in Gwaneum-ri was also damaged that the couple and their daughter who were recovering after childbirth lost their shelter. On this heap of ashes, we had to build a new house as if to plant an apple tree of hope.

When we first visited the site, we could scarcely tell the remnants of the original house except for a little trace of ashes and the photograph of the lost little wooden house. The lost house was originally located at the center with much area of the northern triangular space left empty so as to have a narrower yard than expected. To overcome this drawback, we planned to utilize the rear triangular space properly for the newly built house, separating the trapezoidal mass into two spaces: one for the couple and the other for guests, around the central courtyard. The triangular in-between space was designed as a space for sharing and hope with an apple tree and the level difference utilized.

All approaches to the country house for the old couple were designed as ramps for easy access, while the right-side mass to accommodate guests connects with the central garden. The roof has a sloped form towards the central garden to make a natural flow from the left-side high hill, while the right-side wall of the guest room has a minimal window that blocks the noise from the road and provides a private space.

The living room has a corner window that provides the view towards the southeastern landscape, and the vestibule serves as a separator between the kitchen and the living room. The central garden was designed to satisfy the needs of the couple who like to cook and grow flowers so that they can enjoy cooking with a view of the garden. The bedroom was placed at the back of the site to block the noise from the road, with the bathroom and the dressing room made in a series. Stairs were put at the dressing room through which one can go upstairs to the loft. The guest room, located along the roadside and approached from the vestibule through the small central garden, is at a little lower level than the couple’s room, and its mass was also designed to have a lower height considering the flow of landscape.