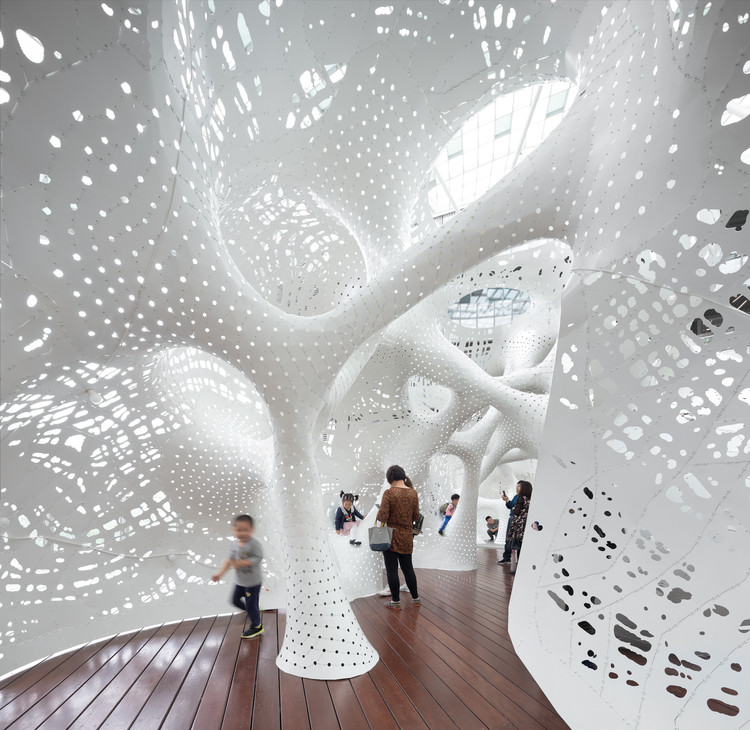 Text description provided by the architects. For the event of the Jinji Lake Biennial, MARC FORNES / THEVERYMANY installed a large-scale outdoor pavilion on the elevated plaza of the Suzhou Center. Its undulating enclosure interrupts the usual traffic, as an unexpected, emergent environment. It appears to have bubbled up from the ground, or dropped from the sky. The structure, both massive in scale and delicate in white aluminum, lands lightly on an ultra-thin edge.

Boolean Operator​—so named for the function that determines relationships between statements, geometries or forms—makes an impression from a distance. Unlike the surrounding texture of the city, this curious structure radiates an otherworldly quality. It casts a strange shadow. It seems to conceal something behind its porous shell. Like seeing the full moon on a clear night, you can start to identify its surface, its irregular craters, and its possible depths. You are drawn closer into its gravitational pull.

Entering the structure is a revelatory experience. Something between a vessel that’s carefully engineered to “move” you and a destination in itself, ​Boolean Operator​ transcends the surrounding environment, even as it remains embedded in it. Typically, we argue for the contextual; here were interested in a point of departure.

Looking to the extraordinary paths around the moon, to the bottom of the sea, and into the center of the earth, we take inspiration from the celebrated author Jules Verne. Across the 54 volumes that make up his Voyages Extraordinaires, Verne opens portals to other universes, but he also delights in the means of travelling there. The ship that takes Captain Nemo to the bottom of the sea is described as both a tactical vehicle and a lush interior, outfitted with an organ, salon, and a formal dining room.

Like Verne's Nautilus, a ship modeled on an early French submarine, our ultra-thin shell structure is a transporting vessel. The vector of translation from one world to another is highly engineered, and for Verne, ahead of its time. Disguised as a kind of sea creature in steel sheet metal, the Nautilus becomes a conspicuous part of the habitat it navigates.

The technology described in the ​Voyages Extraordinaire​s prefigures the innovations with which we are familiar today: u-boats, satellites, spacecrafts, and television. A century and a half after Verne, THEVERYMANY are dedicated to making real the fantasies otherwise relegated to the digital and we are practiced in fabricating architecture that defies convention. Over a decade of prototyping double-curving constructions and realizing “crawling assemblies”-- the rigorous pursuit of another kind of architectural experience -- has taken us to this site across the world from our Brooklyn studio.

THE INSTANCE OF THE SKIN -- CROSSING A THRESHOLD

In one respect, our journey happens in an instance: you cross the threshold and you are, all of a sudden, somewhere else entirely. The drama of the interior atmosphere makes you feel as if you have suddenly descended into some other world, despite the thinness of the enclosure that separates you from the familiar terrain beyond.

Suffuse in light, the details come into and out of focus. A continuous surface grows from a network of columns that peel open into the enclosing shell. ​Topologically​, there is no simple dichotomy between envelope and supports, but the two are made from a continuous skin that self-supports throughout. The relationship is like an unwrapping: what is inside of the columns eventually becomes the outside of the shell. In aluminum parts as thin as 1mm in places where the curvature is tightest and up to 2mm thick on the largest spans, the structure maintains a light impact on the ground.

The intricacy of the skin asserts a ​density​: of limbs, of openings, of parts and their connections. You have to let your eyes adjust to the resolution of the experience. Unfocusing your gaze again, the whole scene overwhelms, strikes awe, compels you to move closer, deeper, and through an edgeless space. The doubly-curved surfaces cast no regular shadows, giving little information to the eye to perceive its scale or depth. The only way to understand the space is to move through it. Your winding path isn’t designed, but implied by a swirl of light, plotted on a map of your own desires.

And so it becomes an irresistible ​terrain f​ or play. All the instances where columns branch and recombine into the bulbous shell, make for an architecture that opens to climbing, ducking, hurdling, hiding and seeking. Children are the best explorers of this environment, while attending parents wonder how the structure sustains this activity despite being so thin.

A constellation of openings in the skin are also the result of a kind of exploration. Crawling agents of a ​computational search protocol​ find their way across the aggregated mesh, leaving a trail of non-linear stripes in one pass and apertures between them in another. The two directions of flow curves result from a ​structural analysis​ on the digital 3D geometry. Agents determine the directional fitness as well as the maximum length of stripes along these paths so that they can be accommodated on a conventional sheet of aluminum. In another direction, sometimes aligned with the parts, sometimes snaking across them, agents locate opportunities to eat away at the envelope, leaving the minimum material to sustain the structure, but augmenting the experience through a complex game of shadows. Visitors to the site retrace these paths with their gaze or their hands: even in close range, there are hidden dimensions.

A PUBLIC INTERIOR TO DISCOVER AND REDISCOVER

MARC FORNES / THEVERYMANY approaches public art as the art of experiencing public space: In intricate and impactful installations, we make place by altering daily experience of those that live or work or travel through a neighborhood. These structures assert a distinct presence on the urban scale and maintain enchantment down to their rivets.

Boolean Operator​ is a public room that is unlike anything that lives in the city. It’s an art experience catches you off guard, a surprising interior to be found among the usual business of the Suzhou Center. It must be entered to be discovered, but as it becomes known and mapped by Suzhou locals, it becomes a site to pursue, to seek out, and to transport you over and over again. 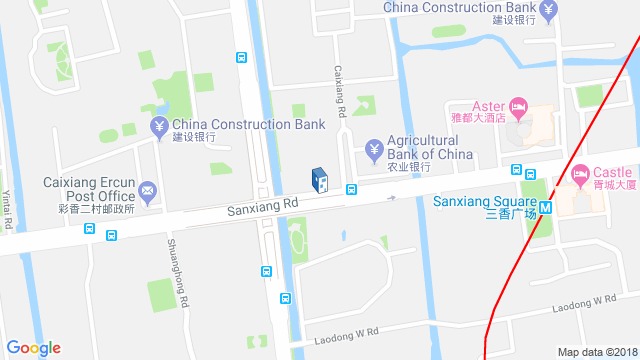 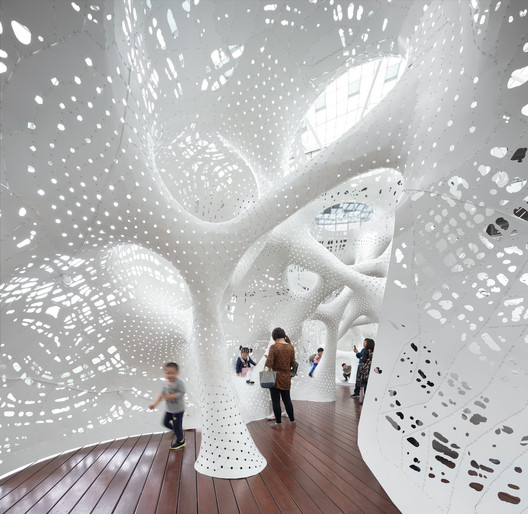