‘Hololightkeeper,’ a conceptual model that is distinct in its use of holographic technologies, pays homage to an architectural structure that has quickly been transformed into a historic relic. The lighthouse, once a navigational aid to guide sailors towards land and warn traveling ships of dangerous conditions, has been replaced in its function by modern technologies. In this respect, Studio NAB’s ‘Hololightkeeper’ attempts to resurrect a building typology by dematerializing the lighthouse structure-type, while maintaining its historic symbolism. 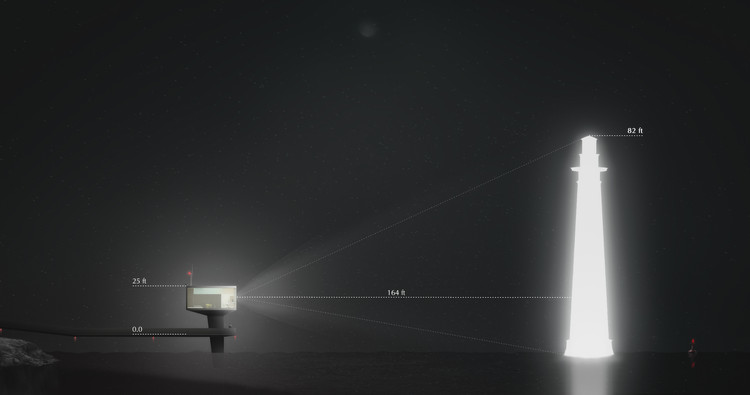 Studio NAB has re-appropriated the use of the lighthouse classification. The envisioned structure consists of a 30 square-meter cabin, encased in stainless steel panels, that sits atop a metal framework and reinforced concrete. The stabilizing pillar intersects with a bridge, connecting the inhabitable structure to land. A retractable ladder extends from the base of the elevated cabin to the bridge below.

The compact interior envelope houses both living and working spaces. The structure’s integrated technologies allow the lighthouse attendant to broadcast a visual hologram of a historical lighthouse’s recognizable silhouette into the night sky.

With rising sea levels and other environmental changes impacting shoreline communities around the world, Studio NAB’s design for the ‘Hololightkeeper’ minimizes the structure’s environmental impact. All energy required for the structure to function is generated through wind turbines and solar panels. A portion of the structure’s internal technology is also dedicated to purifying sea water into drinking water for the inhabitants.

The 3D hologram, projected from the wall of the cabin, diffuses at around 50 meters from the structure itself. A transparent mesh, fixed on a structure anchored in the seabed, catches the light and stabilizes the hologram to create a representation of historic lighthouse architecture and integrating it into the seascape. The hologram’s allegorical properties link the classic lighthouse design to contemporary and experimental forms of technology – while preserving some of its navigational and symbolic properties. 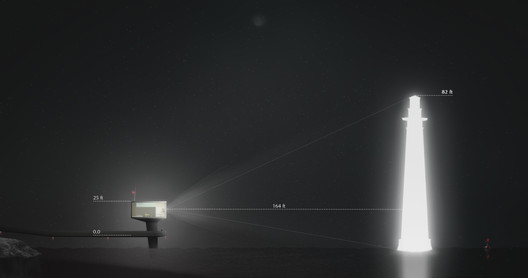