The station prototype focuses on a tessellated module that can expand or contract to adapt to a variety of contexts. This flexibility is intended to allow ease of development in a variety of contexts, be it in a city center, suburb, or as an attachment to an existing transit hub. Rather than simply forcing cities to commit to new developments to accommodate these future transit options, modularity in this scheme is considered key to easy contextual integration.

Modularity of the station design is not just an urban strategy; it forms the basis of the architecture of the stations themselves. Every element within the buildings are also meant to work within a simple and adaptable framework, connecting all elements from entry to platform.

Speed is key to the attraction of the hyperloop, not just as a means of public transit but also for the movement of goods. The focus on scalable design in UNStudio's approach suggests the possibility to connect not just urban areas but also rural ones. This could be transformational, as existing urban areas are becoming increasingly choked by development and isolated from their surroundings.

The project was designed by UNStudio's future-focused think tank, UNSFutures. The office's trademark approach is also on display here, with soft curves forming the basis of each module. The organic form is both visually appealing and intended to help traffic (both train and pedestrian) move smoothly through the station. 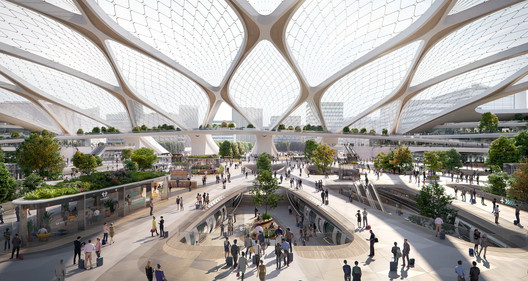